Wednesday of the 4th Week of Advent 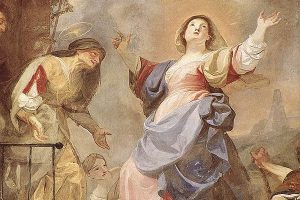 
24 And when she had weaned him, she took him up with her, along with a three-year-old bull, an ephah of flour, and a skin of wine; and she brought him to the house of the LORD at Shiloh; and the child was young. 25 Then they slew the bull, and they brought the child to Eli. 26 And she said, “Oh, my lord! As you live, my lord, I am the woman who was standing here in your presence, praying to the LORD. 27 For this child I prayed; and the LORD has granted me my petition which I made to him. 28 Therefore I have lent him to the LORD; as long as he lives, he is lent to the LORD.” And they worshiped the LORD there.


1 Hannah also prayed and said, “My heart exults in the LORD; my strength is exalted in the LORD. My mouth derides my enemies, because I rejoice in thy salvation. 4 The bows of the mighty are broken, but the feeble gird on strength. 5 Those who were full have hired themselves out for bread, but those who were hungry have ceased to hunger. The barren has borne seven, but she who has many children is forlorn. 6 The LORD kills and brings to life; he brings down to Sheol and raises up. 7 The LORD makes poor and makes rich; he brings low, he also exalts. 8 He raises up the poor from the dust; he lifts the needy from the ash heap, to make them sit with princes and inherit a seat of honor. For the pillars of the earth are the LORD’S, and on them he has set the world.


46 And Mary said, “My soul magnifies the Lord, 47 and my spirit rejoices in God my Savior, 48 for he has regarded the low estate of his handmaiden. For behold, henceforth all generations will call me blessed; 49 for he who is mighty has done great things for me, and holy is his name. 50 And his mercy is on those who fear him from generation to generation. 51 He has shown strength with his arm, he has scattered the proud in the imagination of their hearts, 52 he has put down the mighty from their thrones, and exalted those of low degree; 53 he has filled the hungry with good things, and the rich he has sent empty away. 54 He has helped his servant Israel, in remembrance of his mercy, 55 as he spoke to our fathers, to Abraham and to his posterity for ever.” 56 And Mary remained with her about three months, and returned to her home.

Reflection for the day: “Rejoice and be glad that so great and good a Lord, on coming into the Virgin’s womb, willed to appear despised, needy, and poor in this world, so that men who were in dire poverty and suffering great need of heavenly food might be made rich in him.” – St. Clare of Assisi