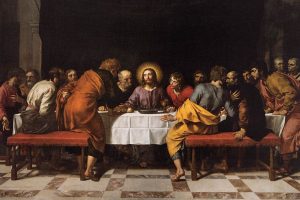 
1 Then Joshua gathered all the tribes of Israel to Shechem, and summoned the elders, the heads, the judges, and the officers of Israel; and they presented themselves before God. 2 And Joshua said to all the people, “Thus says the LORD, the God of Israel, `Your fathers lived of old beyond the Euphra’tes, Terah, the father of Abraham and of Nahor; and they served other gods. 15 And if you be unwilling to serve the LORD, choose this day whom you will serve, whether the gods your fathers served in the region beyond the River, or the gods of the Amorites in whose land you dwell; but as for me and my house, we will serve the LORD.” 16 Then the people answered, “Far be it from us that we should forsake the LORD, to serve other gods; 17 for it is the LORD our God who brought us and our fathers up from the land of Egypt, out of the house of bondage, and who did those great signs in our sight, and preserved us in all the way that we went, and among all the peoples through whom we passed; 18 and the LORD drove out before us all the peoples, the Amorites who lived in the land; therefore we also will serve the LORD, for he is our God.”


1 I will bless the LORD at all times; his praise shall continually be in my mouth. 2 My soul makes its boast in the LORD; let the afflicted hear and be glad. 15 The eyes of the LORD are toward the righteous, and his ears toward their cry. 16 The face of the LORD is against evildoers, to cut off the remembrance of them from the earth. 17 When the righteous cry for help, the LORD hears, and delivers them out of all their troubles. 18 The LORD is near to the brokenhearted, and saves the crushed in spirit. 19 Many are the afflictions of the righteous; but the LORD delivers him out of them all. 20 He keeps all his bones; not one of them is broken.


21 Be subject to one another out of reverence for Christ. 22 Wives, be subject to your husbands, as to the Lord. 23 For the husband is the head of the wife as Christ is the head of the church, his body, and is himself its Savior. 24 As the church is subject to Christ, so let wives also be subject in everything to their husbands. 25 Husbands, love your wives, as Christ loved the church and gave himself up for her, 26 that he might sanctify her, having cleansed her by the washing of water with the word, 27 that he might present the church to himself in splendor, without spot or wrinkle or any such thing, that she might be holy and without blemish. 28 Even so husbands should love their wives as their own bodies. He who loves his wife loves himself. 29 For no man ever hates his own flesh, but nourishes and cherishes it, as Christ does the church, 30 because we are members of his body. 31 “For this reason a man shall leave his father and mother and be joined to his wife, and the two shall become one flesh.” 32 This mystery is a profound one, and I am saying that it refers to Christ and the church.

Reflection for the day: “He remains among us until the end of the world. He dwells on so many altars, though so often offended and profaned.” — St. Maximilian Kolbe