Tuesday of the 17th Week in Ordinary Time 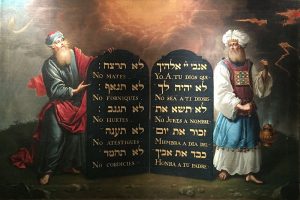 
33:7 Now Moses used to take the tent and pitch it outside the camp, far off from the camp; and he called it the tent of meeting. And every one who sought the LORD would go out to the tent of meeting, which was outside the camp. 8 Whenever Moses went out to the tent, all the people rose up, and every man stood at his tent door, and looked after Moses, until he had gone into the tent. 9 When Moses entered the tent, the pillar of cloud would descend and stand at the door of the tent, and the LORD would speak with Moses. 10 And when all the people saw the pillar of cloud standing at the door of the tent, all the people would rise up and worship, every man at his tent door. 11 Thus the LORD used to speak to Moses face to face, as a man speaks to his friend. When Moses turned again into the camp, his servant Joshua the son of Nun, a young man, did not depart from the tent. 34:5 And the LORD descended in the cloud and stood with him there, and proclaimed the name of the LORD. 6 The LORD passed before him, and proclaimed, “The LORD, the LORD, a God merciful and gracious, slow to anger, and abounding in steadfast love and faithfulness, 7 keeping steadfast love for thousands, forgiving iniquity and transgression and sin, but who will by no means clear the guilty, visiting the iniquity of the fathers upon the children and the children’s children, to the third and the fourth generation.” 8 And Moses made haste to bow his head toward the earth, and worshiped. 9 And he said, “If now I have found favor in thy sight, O Lord, let the Lord, I pray thee, go in the midst of us, although it is a stiff-necked people; and pardon our iniquity and our sin, and take us for thy inheritance.” 28 And he was there with the LORD forty days and forty nights; he neither ate bread nor drank water. And he wrote upon the tables the words of the covenant, the ten commandments.


6 The LORD works vindication and justice for all who are oppressed. 7 He made known his ways to Moses, his acts to the people of Israel. 8 The LORD is merciful and gracious, slow to anger and abounding in steadfast love. 9 He will not always chide, nor will he keep his anger for ever. 10 He does not deal with us according to our sins, nor requite us according to our iniquities. 11 For as the heavens are high above the earth, so great is his steadfast love toward those who fear him; 12 as far as the east is from the west, so far does he remove our transgressions from us. 13 As a father pities his children, so the LORD pities those who fear him.


36 Then he left the crowds and went into the house. And his disciples came to him, saying, “Explain to us the parable of the weeds of the field.” 37 He answered, “He who sows the good seed is the Son of man; 38 the field is the world, and the good seed means the sons of the kingdom; the weeds are the sons of the evil one, 39 and the enemy who sowed them is the devil; the harvest is the close of the age, and the reapers are angels. 40 Just as the weeds are gathered and burned with fire, so will it be at the close of the age. 41 The Son of man will send his angels, and they will gather out of his kingdom all causes of sin and all evildoers, 42 and throw them into the furnace of fire; there men will weep and gnash their teeth. 43 Then the righteous will shine like the sun in the kingdom of their Father. He who has ears, let him hear.”