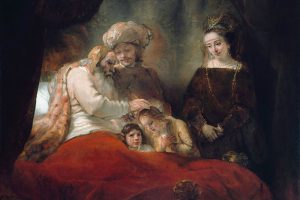 29 Then he charged them, and said to them, “I am to be gathered to my people; bury me with my fathers in the cave that is in the field of Ephron the Hittite, 30 in the cave that is in the field at Mach-pe′lah, to the east of Mamre, in the land of Canaan, which Abraham bought with the field from Ephron the Hittite to possess as a burying place. 31 There they buried Abraham and Sarah his wife; there they buried Isaac and Rebekah his wife; and there I buried Leah—32 the field and the cave that is in it were purchased from the Hittites.” 33 When Jacob finished charging his sons, he drew up his feet into the bed, and breathed his last, and was gathered to his people. 50:15 When Joseph’s brothers saw that their father was dead, they said, “It may be that Joseph will hate us and pay us back for all the evil which we did to him.” 16 So they sent a message to Joseph, saying, “Your father gave this command before he died, 17 ‘Say to Joseph, Forgive, I pray you, the transgression of your brothers and their sin, because they did evil to you.’ And now, we pray you, forgive the transgression of the servants of the God of your father.” Joseph wept when they spoke to him. 18 His brothers also came and fell down before him, and said, “Behold, we are your servants.” 19 But Joseph said to them, “Fear not, for am I in the place of God? 20 As for you, you meant evil against me; but God meant it for good, to bring it about that many people should be kept alive, as they are today. 21 So do not fear; I will provide for you and your little ones.” Thus he reassured them and comforted them. 22 So Joseph dwelt in Egypt, he and his father’s house; and Joseph lived a hundred and ten years. 23 And Joseph saw E′phraim’s children of the third generation; the children also of Machir the son of Manas′seh were born upon Joseph’s knees. 24 And Joseph said to his brothers, “I am about to die; but God will visit you, and bring you up out of this land to the land which he swore to Abraham, to Isaac, and to Jacob.” 25 Then Joseph took an oath of the sons of Israel, saying, “God will visit you, and you shall carry up my bones from here.” 26 So Joseph died, being a hundred and ten years old; and they embalmed him, and he was put in a coffin in Egypt.

1 O give thanks to the Lord, call on his name, make known his deeds among the peoples! 2 Sing to him, sing praises to him, tell of all his wonderful works! 3 Glory in his holy name; let the hearts of those who seek the Lord rejoice! 4 Seek the Lord and his strength, seek his presence continually! 6 O offspring of Abraham his servant, sons of Jacob, his chosen ones! 7 He is the Lord our God; his judgments are in all the earth.

24 “A disciple is not above his teacher, nor a servant above his master; 25 it is enough for the disciple to be like his teacher, and the servant like his master. If they have called the master of the house Be-el′zebul, how much more will they malign those of his household. 26 So have no fear of them; for nothing is covered that will not be revealed, or hidden that will not be known. 27 What I tell you in the dark, utter in the light; and what you hear whispered, proclaim upon the housetops. 28 And do not fear those who kill the body but cannot kill the soul; rather fear him who can destroy both soul and body in hell. 29 Are not two sparrows sold for a penny? And not one of them will fall to the ground without your Father’s will. 30 But even the hairs of your head are all numbered. 31 Fear not, therefore; you are of more value than many sparrows. 32 So every one who acknowledges me before men, I also will acknowledge before my Father who is in heaven; 33 but whoever denies me before men, I also will deny before my Father who is in heaven.”

Reflection for the day: “As a mother delights in taking her child on her knees, in caressing and feeding him, so does our God delight in treating with love and tenderness those souls who give themselves entirely to Him, and place all their hopes in His goodness and bounty.” — St. Alphonsus Liguori