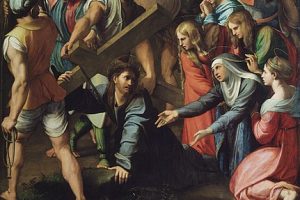 14 All the leading priests and the people likewise were exceedingly unfaithful, following all the abominations of the nations; and they polluted the house of the LORD which he had hallowed in Jerusalem. 15 The LORD, the God of their fathers, sent persistently to them by his messengers, because he had compassion on his people and on his dwelling place; 16 but they kept mocking the messengers of God, despising his words, and scoffing at his prophets, till the wrath of the LORD rose against his people, till there was no remedy. 17 Therefore he brought up against them the king of the Chalde’ans, who slew their young men with the sword in the house of their sanctuary, and had no compassion on young man or virgin, old man or aged; he gave them all into his hand. 19 And they burned the house of God, and broke down the wall of Jerusalem, and burned all its palaces with fire, and destroyed all its precious vessels. 20 He took into exile in Babylon those who had escaped from the sword, and they became servants to him and to his sons until the establishment of the kingdom of Persia, 21 to fulfil the word of the LORD by the mouth of Jeremiah, until the land had enjoyed its sabbaths. All the days that it lay desolate it kept sabbath, to fulfil seventy years. 22 Now in the first year of Cyrus king of Persia, that the word of the LORD by the mouth of Jeremiah might be accomplished, the LORD stirred up the spirit of Cyrus king of Persia so that he made a proclamation throughout all his kingdom and also put it in writing: 23 “Thus says Cyrus king of Persia, `The LORD, the God of heaven, has given me all the kingdoms of the earth, and he has charged me to build him a house at Jerusalem, which is in Judah. Whoever is among you of all his people, may the LORD his God be with him. Let him go up.'”

1 By the waters of Babylon, there we sat down and wept, when we remembered Zion. 2 On the willows there we hung up our lyres. 3 For there our captors required of us songs, and our tormentors, mirth, saying, “Sing us one of the songs of Zion!” 4 How shall we sing the LORD’s song in a foreign land? 5 If I forget you, O Jerusalem, let my right hand wither! 6 Let my tongue cleave to the roof of my mouth, if I do not remember you, if I do not set Jerusalem above my highest joy!

4 But God, who is rich in mercy, out of the great love with which he loved us, 5 even when we were dead through our trespasses, made us alive together with Christ (by grace you have been saved), 6 and raised us up with him, and made us sit with him in the heavenly places in Christ Jesus, 7 that in the coming ages he might show the immeasurable riches of his grace in kindness toward us in Christ Jesus. 8 For by grace you have been saved through faith; and this is not your own doing, it is the gift of God — 9 not because of works, lest any man should boast. 10 For we are his workmanship, created in Christ Jesus for good works, which God prepared beforehand, that we should walk in them.

14 “And as Moses lifted up the serpent in the wilderness, so must the Son of man be lifted up, 15 that whoever believes in him may have eternal life.” 16 For God so loved the world that he gave his only Son, that whoever believes in him should not perish but have eternal life. 17 For God sent the Son into the world, not to condemn the world, but that the world might be saved through him. 18 He who believes in him is not condemned; he who does not believe is condemned already, because he has not believed in the name of the only Son of God. 19 And this is the judgment, that the light has come into the world, and men loved darkness rather than light, because their deeds were evil. 20 For every one who does evil hates the light, and does not come to the light, lest his deeds should be exposed. 21 But he who does what is true comes to the light, that it may be clearly seen that his deeds have been wrought in God.

Reflection for the day: “Consider how the Son met His Mother on His way to Calvary. Jesus and Mary gazed at each other and their looks became as so many arrows to wound those hearts which loved each other so tenderly.” — St. Alphonsus Liguori, Stations of the Cross (4th Station: Jesus Meets His Afflicted Mother)