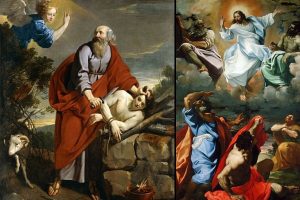 1 After these things God tested Abraham, and said to him, “Abraham!” And he said, “Here am I.” 2 He said, “Take your son, your only son Isaac, whom you love, and go to the land of Mori’ah, and offer him there as a burnt offering upon one of the mountains of which I shall tell you.” 9 When they came to the place of which God had told him, Abraham built an altar there, and laid the wood in order, and bound Isaac his son, and laid him on the altar, upon the wood. 10 Then Abraham put forth his hand, and took the knife to slay his son. 11 But the angel of the LORD called to him from heaven, and said, “Abraham, Abraham!” And he said, “Here am I.” 12 He said, “Do not lay your hand on the lad or do anything to him; for now I know that you fear God, seeing you have not withheld your son, your only son, from me.” 13 And Abraham lifted up his eyes and looked, and behold, behind him was a ram, caught in a thicket by his horns; and Abraham went and took the ram, and offered it up as a burnt offering instead of his son. 15 And the angel of the LORD called to Abraham a second time from heaven, 16 and said, “By myself I have sworn, says the LORD, because you have done this, and have not withheld your son, your only son, 17 I will indeed bless you, and I will multiply your descendants as the stars of heaven and as the sand which is on the seashore. And your descendants shall possess the gate of their enemies, 18 and by your descendants shall all the nations of the earth bless themselves, because you have obeyed my voice.”

10 I kept my faith, even when I said, “I am greatly afflicted”; 15 Precious in the sight of the LORD is the death of his saints. 16 O LORD, I am thy servant; I am thy servant, the son of thy handmaid. Thou hast loosed my bonds. 17 I will offer to thee the sacrifice of thanksgiving and call on the name of the LORD. 18 I will pay my vows to the LORD in the presence of all his people, 19 in the courts of the house of the LORD, in your midst, O Jerusalem. Praise the LORD!

31 What then shall we say to this? If God is for us, who is against us? 32 He who did not spare his own Son but gave him up for us all, will he not also give us all things with him? 33 Who shall bring any charge against God’s elect? It is God who justifies; 34 who is to condemn? Is it Christ Jesus, who died, yes, who was raised from the dead, who is at the right hand of God, who indeed intercedes for us?

2 And after six days Jesus took with him Peter and James and John, and led them up a high mountain apart by themselves; and he was transfigured before them, 3 and his garments became glistening, intensely white, as no fuller on earth could bleach them. 4 And there appeared to them Eli’jah with Moses; and they were talking to Jesus. 5 And Peter said to Jesus, “Master, it is well that we are here; let us make three booths, one for you and one for Moses and one for Eli’jah.” 6 For he did not know what to say, for they were exceedingly afraid. 7 And a cloud overshadowed them, and a voice came out of the cloud, “This is my beloved Son; listen to him.” 8 And suddenly looking around they no longer saw any one with them but Jesus only. 9 And as they were coming down the mountain, he charged them to tell no one what they had seen, until the Son of man should have risen from the dead. 10 So they kept the matter to themselves, questioning what the rising from the dead meant.

Reflection for the day: “When I shrink from suffering, Jesus reproves me and tells me that He did not refuse to suffer. Then I say ‘Jesus, Your will and not mine’. At last I am convinced that only God can make me happy, and in Him I have placed all my hope…” — St. Gemma Galgani