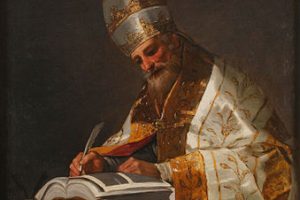 
18 Let no one deceive himself. If any one among you thinks that he is wise in this age, let him become a fool that he may become wise. 19 For the wisdom of this world is folly with God. For it is written, “He catches the wise in their craftiness,” 20 and again, “The Lord knows that the thoughts of the wise are futile.” 21 So let no one boast of men. For all things are yours, 22 whether Paul or Apol’los or Cephas or the world or life or death or the present or the future, all are yours; 23 and you are Christ’s; and Christ is God’s.

Reflection for the day: “If we knew at what time we were to depart from this world, we would be able to select a season for pleasure and another for repentance. But God, who has promised pardon to every repentant sinner, has not promised us tomorrow. Therefore we must always dread the final day, which we can never foresee. This VERY DAY is a day of truce, a day for conversion. And yet we refuse to cry over the evil we have done! Not only do we not weep for the sins we have committed, we even add to them…” — Pope St. Gregory the Great