Wednesday of the 22nd Week of Ordinary Time 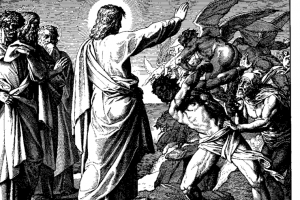 
1 But I, brethren, could not address you as spiritual men, but as men of the flesh, as babes in Christ. 2 I fed you with milk, not solid food; for you were not ready for it; and even yet you are not ready, 3 for you are still of the flesh. For while there is jealousy and strife among you, are you not of the flesh, and behaving like ordinary men? 4 For when one says, “I belong to Paul,” and another, “I belong to Apol’los,” are you not merely men? 5 What then is Apol’los? What is Paul? Servants through whom you believed, as the Lord assigned to each. 6 I planted, Apol’los watered, but God gave the growth. 7 So neither he who plants nor he who waters is anything, but only God who gives the growth. 8 He who plants and he who waters are equal, and each shall receive his wages according to his labor. 9 For we are God’s fellow workers; you are God’s field, God’s building.


12 Blessed is the nation whose God is the LORD, the people whom he has chosen as his heritage! 13 The LORD looks down from heaven, he sees all the sons of men; 14 from where he sits enthroned he looks forth on all the inhabitants of the earth, 15 he who fashions the hearts of them all, and observes all their deeds. 20 Our soul waits for the LORD; he is our help and shield. 21 Yea, our heart is glad in him, because we trust in his holy name.


38 And he arose and left the synagogue, and entered Simon’s house. Now Simon’s mother-in-law was ill with a high fever, and they besought him for her. 39 And he stood over her and rebuked the fever, and it left her; and immediately she rose and served them. 40 Now when the sun was setting, all those who had any that were sick with various diseases brought them to him; and he laid his hands on every one of them and healed them. 41 And demons also came out of many, crying, “You are the Son of God!” But he rebuked them, and would not allow them to speak, because they knew that he was the Christ. 42 And when it was day he departed and went into a lonely place. And the people sought him and came to him, and would have kept him from leaving them; 43 but he said to them, “I must preach the good news of the kingdom of God to the other cities also; for I was sent for this purpose.” 44 And he was preaching in the synagogues of Judea.

Reflection for the day: “Either Christ has a Church in the world continually and until the end of the world, or else He has a Church sometimes, and sometimes not at all. Could we think that He had a Church while He was here Himself, and perhaps awhile after, but mysteriously none since? . . . No . . . that can in no way be, since He must necessarily still preserve His Church somewhere; otherwise, how could He be with His followers continually until the end of the world?” — St. Thomas More