Wednesday of the 20th Week of Ordinary Time 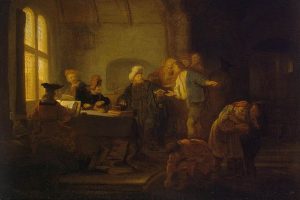 1 The word of the LORD came to me: 2 “Son of man, prophesy against the shepherds of Israel, prophesy, and say to them, even to the shepherds, Thus says the Lord GOD: Ho, shepherds of Israel who have been feeding yourselves! Should not shepherds feed the sheep? 3 You eat the fat, you clothe yourselves with the wool, you slaughter the fatlings; but you do not feed the sheep. 4 The weak you have not strengthened, the sick you have not healed, the crippled you have not bound up, the strayed you have not brought back, the lost you have not sought, and with force and harshness you have ruled them. 5 So they were scattered, because there was no shepherd; and they became food for all the wild beasts. 6 My sheep were scattered, they wandered over all the mountains and on every high hill; my sheep were scattered over all the face of the earth, with none to search or seek for them. 7 “Therefore, you shepherds, hear the word of the LORD: 8 As I live, says the Lord GOD, because my sheep have become a prey, and my sheep have become food for all the wild beasts, since there was no shepherd; and because my shepherds have not searched for my sheep, but the shepherds have fed themselves, and have not fed my sheep; 9 therefore, you shepherds, hear the word of the LORD: 10 Thus says the Lord GOD, Behold, I am against the shepherds; and I will require my sheep at their hand, and put a stop to their feeding the sheep; no longer shall the shepherds feed themselves. I will rescue my sheep from their mouths, that they may not be food for them. 11 “For thus says the Lord GOD: Behold, I, I myself will search for my sheep, and will seek them out.”

1 The LORD is my shepherd, I shall not want; 2 he makes me lie down in green pastures. He leads me beside still waters; 3 he restores my soul. He leads me in paths of righteousness for his name’s sake. 4 Even though I walk through the valley of the shadow of death, I fear no evil; for thou art with me; thy rod and thy staff, they comfort me. 5 Thou preparest a table before me in the presence of my enemies; thou anointest my head with oil, my cup overflows. 6 Surely goodness and mercy shall follow me all the days of my life; and I shall dwell in the house of the LORD for ever.

1 “For the kingdom of heaven is like a householder who went out early in the morning to hire laborers for his vineyard. 2 After agreeing with the laborers for a denarius a day, he sent them into his vineyard. 3 And going out about the third hour he saw others standing idle in the market place; 4 and to them he said, `You go into the vineyard too, and whatever is right I will give you.’ So they went. 5 Going out again about the sixth hour and the ninth hour, he did the same. 6 And about the eleventh hour he went out and found others standing; and he said to them, `Why do you stand here idle all day?’ 7 They said to him, `Because no one has hired us.’ He said to them, `You go into the vineyard too.’ 8 And when evening came, the owner of the vineyard said to his steward, `Call the laborers and pay them their wages, beginning with the last, up to the first.’ 9 And when those hired about the eleventh hour came, each of them received a denarius. 10 Now when the first came, they thought they would receive more; but each of them also received a denarius. 11 And on receiving it they grumbled at the householder, 12 saying, `These last worked only one hour, and you have made them equal to us who have borne the burden of the day and the scorching heat.’ 13 But he replied to one of them, `Friend, I am doing you no wrong; did you not agree with me for a denarius? 14 Take what belongs to you, and go; I choose to give to this last as I give to you. 15 Am I not allowed to do what I choose with what belongs to me? Or do you begrudge my generosity?’ 16 So the last will be first, and the first last.”

Reflection for the day: “The Church has ever proved indestructible. Her persecutors have failed to destroy her; in fact, it was during times of persecution that the Church grew more and more; while the persecutors themselves, and those whom the Church would destroy, are the very ones who came to nothing. . . .Again, errors have assailed her; but in fact, the greater the number of errors that have arisen, the more has the truth been made manifest. . . . Nor has the Church failed before the assaults of demons: for she is like a tower of refuge to all who fight against the Devil.” — St. Thomas Aquinas