Friday of the 12th Week of Ordinary Time 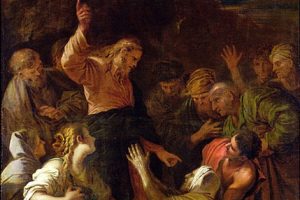 1 And in the ninth year of his reign, in the tenth month, on the tenth day of the month, Nebuchadnez’zar king of Babylon came with all his army against Jerusalem, and laid siege to it; and they built siegeworks against it round about. 2 So the city was besieged till the eleventh year of King Zedeki’ah. 3 On the ninth day of the fourth month the famine was so severe in the city that there was no food for the people of the land. 4 Then a breach was made in the city; the king with all the men of war fled by night by the way of the gate between the two walls, by the king’s garden, though the Chalde’ans were around the city. And they went in the direction of the Arabah. 5 But the army of the Chalde’ans pursued the king, and overtook him in the plains of Jericho; and all his army was scattered from him. 6 Then they captured the king, and brought him up to the king of Babylon at Riblah, who passed sentence upon him. 7 They slew the sons of Zedeki’ah before his eyes, and put out the eyes of Zedeki’ah, and bound him in fetters, and took him to Babylon. 8 In the fifth month, on the seventh day of the month — which was the nineteenth year of King Nebuchadnez’zar, king of Babylon — Nebu’zarad’an, the captain of the bodyguard, a servant of the king of Babylon, came to Jerusalem. 9 And he burned the house of the LORD, and the king’s house and all the houses of Jerusalem; every great house he burned down. 10 And all the army of the Chalde’ans, who were with the captain of the guard, broke down the walls around Jerusalem. 11 And the rest of the people who were left in the city and the deserters who had deserted to the king of Babylon, together with the rest of the multitude, Nebu’zarad’an the captain of the guard carried into exile. 12 But the captain of the guard left some of the poorest of the land to be vinedressers and plowmen.

1 By the waters of Babylon, there we sat down and wept, when we remembered Zion. 2 On the willows there we hung up our lyres. 3 For there our captors required of us songs, and our tormentors, mirth, saying, “Sing us one of the songs of Zion!” 4 How shall we sing the LORD’s song in a foreign land? 5 If I forget you, O Jerusalem, let my right hand wither! 6 Let my tongue cleave to the roof of my mouth, if I do not remember you, if I do not set Jerusalem above my highest joy!

1 When he came down from the mountain, great crowds followed him; 2 and behold, a leper came to him and knelt before him, saying, “Lord, if you will, you can make me clean.” 3 And he stretched out his hand and touched him, saying, “I will; be clean.” And immediately his leprosy was cleansed. 4 And Jesus said to him, “See that you say nothing to any one; but go, show yourself to the priest, and offer the gift that Moses commanded, for a proof to the people.”

Reflection for the day: “Our Lord Jesus Christ desires that we should, for sanctifying ourselves, glorify His all-loving Heart; for it was His Heart that suffered the most in His Sacred Humanity.” — St. Margaret Mary Alacoque