Memorial of the Immaculate Heart of Mary 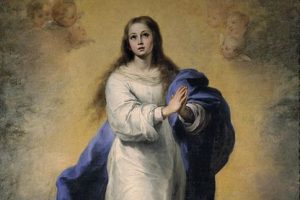 
17 Now after the death of Jehoi’ada the princes of Judah came and did obeisance to the king; then the king hearkened to them. 18 And they forsook the house of the LORD, the God of their fathers, and served the Ashe’rim and the idols. And wrath came upon Judah and Jerusalem for this their guilt. 19 Yet he sent prophets among them to bring them back to the LORD; these testified against them, but they would not give heed. 20 Then the Spirit of God took possession of Zechari’ah the son of Jehoi’ada the priest; and he stood above the people, and said to them, “Thus says God, `Why do you transgress the commandments of the LORD, so that you cannot prosper? Because you have forsaken the LORD, he has forsaken you.'” 21 But they conspired against him, and by command of the king they stoned him with stones in the court of the house of the LORD. 22 Thus Jo’ash the king did not remember the kindness which Jehoi’ada, Zechari’ah’s father, had shown him, but killed his son. And when he was dying, he said, “May the LORD see and avenge!” 23 At the end of the year the army of the Syrians came up against Jo’ash. They came to Judah and Jerusalem, and destroyed all the princes of the people from among the people, and sent all their spoil to the king of Damascus. 24 Though the army of the Syrians had come with few men, the LORD delivered into their hand a very great army, because they had forsaken the LORD, the God of their fathers. Thus they executed judgment on Jo’ash. 25 When they had departed from him, leaving him severely wounded, his servants conspired against him because of the blood of the son of Jehoi’ada the priest, and slew him on his bed. So he died; and they buried him in the city of David, but they did not bury him in the tombs of the kings.


3 Thou hast said, “I have made a covenant with my chosen one, I have sworn to David my servant: 4 `I will establish your descendants for ever, and build your throne for all generations.'” [Selah] 28 My steadfast love I will keep for him for ever, and my covenant will stand firm for him. 29 I will establish his line for ever and his throne as the days of the heavens. 30 If his children forsake my law and do not walk according to my ordinances, 31 if they violate my statutes and do not keep my commandments, 32 then I will punish their transgression with the rod and their iniquity with scourges; 33 but I will not remove from him my steadfast love, or be false to my faithfulness.


41 Now his parents went to Jerusalem every year at the feast of the Passover. 42 And when he was twelve years old, they went up according to custom; 43 and when the feast was ended, as they were returning, the boy Jesus stayed behind in Jerusalem. His parents did not know it, 44 but supposing him to be in the company they went a day’s journey, and they sought him among their kinsfolk and acquaintances; 45 and when they did not find him, they returned to Jerusalem, seeking him. 46 After three days they found him in the temple, sitting among the teachers, listening to them and asking them questions; 47 and all who heard him were amazed at his understanding and his answers. 48 And when they saw him they were astonished; and his mother said to him, “Son, why have you treated us so? Behold, your father and I have been looking for you anxiously.” 49 And he said to them, “How is it that you sought me? Did you not know that I must be in my Father’s house?” 50 And they did not understand the saying which he spoke to them. 51 And he went down with them and came to Nazareth, and was obedient to them; and his mother kept all these things in her heart.

Reflection for the day: “The Immaculate alone has from God the promise of victory over Satan. She seeks souls that will consecrate themselves entirely to her, that will become in her hands forceful instruments for the defeat of Satan and the spread of God’s kingdom.” – St. Maximilian Kolbe