Tuesday of the 10th Week of Ordinary Time 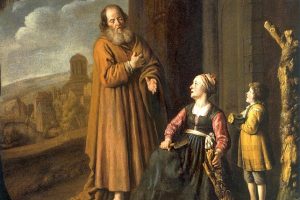 
7 And after a while the brook dried up, because there was no rain in the land. 8 Then the word of the LORD came to him, 9 “Arise, go to Zar’ephath, which belongs to Sidon, and dwell there. Behold, I have commanded a widow there to feed you.” 10 So he arose and went to Zar’ephath; and when he came to the gate of the city, behold, a widow was there gathering sticks; and he called to her and said, “Bring me a little water in a vessel, that I may drink.” 11 And as she was going to bring it, he called to her and said, “Bring me a morsel of bread in your hand.” 12 And she said, “As the LORD your God lives, I have nothing baked, only a handful of meal in a jar, and a little oil in a cruse; and now, I am gathering a couple of sticks, that I may go in and prepare it for myself and my son, that we may eat it, and die.” 13 And Eli’jah said to her, “Fear not; go and do as you have said; but first make me a little cake of it and bring it to me, and afterward make for yourself and your son. 14 For thus says the LORD the God of Israel, `The jar of meal shall not be spent, and the cruse of oil shall not fail, until the day that the LORD sends rain upon the earth.'” 15 And she went and did as Eli’jah said; and she, and he, and her household ate for many days. 16 The jar of meal was not spent, neither did the cruse of oil fail, according to the word of the LORD which he spoke by Eli’jah.


1 Answer me when I call, O God of my right! Thou hast given me room when I was in distress. Be gracious to me, and hear my prayer. 2 O men, how long shall my honor suffer shame? How long will you love vain words, and seek after lies? [Selah] 3 But know that the LORD has set apart the godly for himself; the LORD hears when I call to him. 4 Be angry, but sin not; commune with your own hearts on your beds, and be silent. [Selah] 6 There are many who say, “O that we might see some good! Lift up the light of thy countenance upon us, O LORD!” 7 Thou hast put more joy in my heart than they have when their grain and wine abound.


13 “You are the salt of the earth; but if salt has lost its taste, how shall its saltness be restored? It is no longer good for anything except to be thrown out and trodden under foot by men. 14 You are the light of the world. A city set on a hill cannot be hid. 15 Nor do men light a lamp and put it under a bushel, but on a stand, and it gives light to all in the house. 16 Let your light so shine before men, that they may see your good works and give glory to your Father who is in heaven.”

Reflection for the day: “Joy is a net of love by which we catch souls.” — St. Teresa of Calcutta