Friday of the 4th Week in Ordinary Time 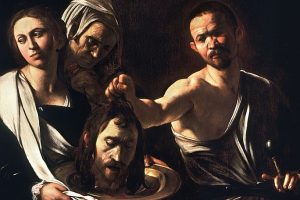 2 As the fat is selected from the peace offering, so David was selected from the sons of Israel. 3 He played with lions as with young goats, and with bears as with lambs of the flock. 4 In his youth did he not kill a giant, and take away reproach from the people, when he lifted his hand with a stone in the sling and struck down the boasting of Goliath? 5 For he appealed to the Lord, the Most High, and he gave him strength in his right hand to slay a man mighty in war, to exalt the power of his people. 6 So they glorified him for his ten thousands, and praised him for the blessings of the Lord, when the glorious diadem was bestowed upon him. 7 For he wiped out his enemies on every side, and annihilated his adversaries the Philistines; he crushed their power even to this day. 8 In all that he did he gave thanks to the Holy One, the Most High, with ascriptions of glory; he sang praise with all his heart, and he loved his Maker. 9 He placed singers before the altar, to make sweet melody with their voices. 10 He gave beauty to the feasts, and arranged their times throughout the year, while they praised God’s holy name, and the sanctuary resounded from early morning. 11 The Lord took away his sins, and exalted his power for ever; he gave him the covenant of kings and a throne of glory in Israel.

30 This God — his way is perfect; the promise of the LORD proves true; he is a shield for all those who take refuge in him. 46 The LORD lives; and blessed be my rock, and exalted be the God of my salvation, 49 For this I will extol thee, O LORD, among the nations, and sing praises to thy name. 50 Great triumphs he gives to his king, and shows steadfast love to his anointed, to David and his descendants for ever.

14 King Herod heard of it; for Jesus’ name had become known. Some said, “John the baptizer has been raised from the dead; that is why these powers are at work in him.” 15 But others said, “It is Eli’jah.” And others said, “It is a prophet, like one of the prophets of old.” 16 But when Herod heard of it he said, “John, whom I beheaded, has been raised.” 17 For Herod had sent and seized John, and bound him in prison for the sake of Hero’di-as, his brother Philip’s wife; because he had married her. 18 For John said to Herod, “It is not lawful for you to have your brother’s wife.” 19 And Hero’di-as had a grudge against him, and wanted to kill him. But she could not, 20 for Herod feared John, knowing that he was a righteous and holy man, and kept him safe. When he heard him, he was much perplexed; and yet he heard him gladly. 21 But an opportunity came when Herod on his birthday gave a banquet for his courtiers and officers and the leading men of Galilee. 22 For when Hero’di-as’ daughter came in and danced, she pleased Herod and his guests; and the king said to the girl, “Ask me for whatever you wish, and I will grant it.” 23 And he vowed to her, “Whatever you ask me, I will give you, even half of my kingdom.” 24 And she went out, and said to her mother, “What shall I ask?” And she said, “The head of John the baptizer.” 25 And she came in immediately with haste to the king, and asked, saying, “I want you to give me at once the head of John the Baptist on a platter.” 26 And the king was exceedingly sorry; but because of his oaths and his guests he did not want to break his word to her. 27 And immediately the king sent a soldier of the guard and gave orders to bring his head. He went and beheaded him in the prison, 28 and brought his head on a platter, and gave it to the girl; and the girl gave it to her mother. 29 When his disciples heard of it, they came and took his body, and laid it in a tomb.

Reflection for the day: “Suppose that the whole horizon, as far as you can see from this mountain, were a sea of fire; if we cast into it a bit of tattered thread, it will disappear in an instant. So, when you have committed a fault, humble yourself before God, and cast your fault into the infinite ocean of, charity, and at once it will be effaced from your soul; at the same time all distrust will disappear.” — St. Paul of the Cross