Thursday of the 2nd Week in Ordinary Time 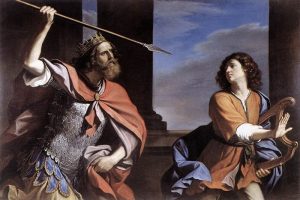 18:6 As they were coming home, when David returned from slaying the Philistine, the women came out of all the cities of Israel, singing and dancing, to meet King Saul, with timbrels, with songs of joy, and with instruments of music. 7 And the women sang to one another as they made merry, “Saul has slain his thousands, and David his ten thousands.” 8 And Saul was very angry, and this saying displeased him; he said, “They have ascribed to David ten thousands, and to me they have ascribed thousands; and what more can he have but the kingdom?” 9 And Saul eyed David from that day on. 19:1 And Saul spoke to Jonathan his son and to all his servants, that they should kill David. But Jonathan, Saul’s son, delighted much in David. 2 And Jonathan told David, “Saul my father seeks to kill you; therefore take heed to yourself in the morning, stay in a secret place and hide yourself; 3 and I will go out and stand beside my father in the field where you are, and I will speak to my father about you; and if I learn anything I will tell you.” 4 And Jonathan spoke well of David to Saul his father, and said to him, “Let not the king sin against his servant David; because he has not sinned against you, and because his deeds have been of good service to you; 5 for he took his life in his hand and he slew the Philistine, and the LORD wrought a great victory for all Israel. You saw it, and rejoiced; why then will you sin against innocent blood by killing David without cause?” 6 And Saul hearkened to the voice of Jonathan; Saul swore, “As the LORD lives, he shall not be put to death.” 7 And Jonathan called David, and Jonathan showed him all these things. And Jonathan brought David to Saul, and he was in his presence as before.

1 Be gracious to me, O God, for men trample upon me; all day long foemen oppress me; 2 my enemies trample upon me all day long, for many fight against me proudly. 8 Thou hast kept count of my tossings; put thou my tears in thy bottle! Are they not in thy book? 9 Then my enemies will be turned back in the day when I call. This I know, that God is for me. 10 In God, whose word I praise, in the LORD, whose word I praise, 11 in God I trust without a fear. What can man do to me? 12 My vows to thee I must perform, O God; I will render thank offerings to thee.

7 Jesus withdrew with his disciples to the sea, and a great multitude from Galilee followed; also from Judea 8 and Jerusalem and Idume’a and from beyond the Jordan and from about Tyre and Sidon a great multitude, hearing all that he did, came to him. 9 And he told his disciples to have a boat ready for him because of the crowd, lest they should crush him; 10 for he had healed many, so that all who had diseases pressed upon him to touch him. 11 And whenever the unclean spirits beheld him, they fell down before him and cried out, “You are the Son of God.” 12 And he strictly ordered them not to make him known.

Reflection for the day: “Let the sick man enter into the Side of Jesus and His most holy Wounds; let him not be afraid, but combat manfully, and he will come forth victorious.” — St. Philip Neri