Monday of the 1st Week in Ordinary Time 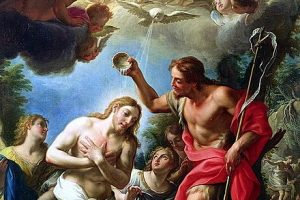 1 There was a certain man of Ramatha’im-zo’phim of the hill country of E’phraim, whose name was Elka’nah the son of Jero’ham, son of Eli’hu, son of Tohu, son of Zuph, an E’phraimite. 2 He had two wives; the name of the one was Hannah, and the name of the other Penin’nah. And Penin’nah had children, but Hannah had no children. 3 Now this man used to go up year by year from his city to worship and to sacrifice to the LORD of hosts at Shiloh, where the two sons of Eli, Hophni and Phin’ehas, were priests of the LORD. 4 On the day when Elka’nah sacrificed, he would give portions to Penin’nah his wife and to all her sons and daughters; 5 and, although he loved Hannah, he would give Hannah only one portion, because the LORD had closed her womb. 6 And her rival used to provoke her sorely, to irritate her, because the LORD had closed her womb. 7 So it went on year by year; as often as she went up to the house of the LORD, she used to provoke her. Therefore Hannah wept and would not eat. 8 And Elka’nah, her husband, said to her, “Hannah, why do you weep? And why do you not eat? And why is your heart sad? Am I not more to you than ten sons?”

14 Now after John was arrested, Jesus came into Galilee, preaching the gospel of God, 15 and saying, “The time is fulfilled, and the kingdom of God is at hand; repent, and believe in the gospel.” 16 And passing along by the Sea of Galilee, he saw Simon and Andrew the brother of Simon casting a net in the sea; for they were fishermen. 17 And Jesus said to them, “Follow me and I will make you become fishers of men.” 18 And immediately they left their nets and followed him. 19 And going on a little farther, he saw James the son of Zeb’edee and John his brother, who were in their boat mending the nets. 20 And immediately he called them; and they left their father Zeb’edee in the boat with the hired servants, and followed him.

Reflection for the day: “Baptism is not the work of man but of Christ, and this sacrament is so holy that it would not be defiled, even if the minister were a murderer.” — St. Isidore