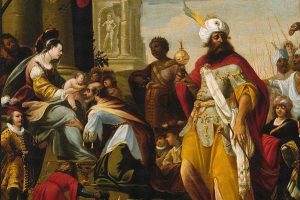 11 Beloved, if God so loved us, we also ought to love one another. 12 No man has ever seen God; if we love one another, God abides in us and his love is perfected in us. 13 By this we know that we abide in him and he in us, because he has given us of his own Spirit. 14 And we have seen and testify that the Father has sent his Son as the Savior of the world. 15 Whoever confesses that Jesus is the Son of God, God abides in him, and he in God. 16 So we know and believe the love God has for us. God is love, and he who abides in love abides in God, and God abides in him. 17 In this is love perfected with us, that we may have confidence for the day of judgment, because as he is so are we in this world. 18 There is no fear in love, but perfect love casts out fear. For fear has to do with punishment, and he who fears is not perfected in love.

1 Give the king thy justice, O God, and thy righteousness to the royal son! 9 May his foes bow down before him, and his enemies lick the dust! 11 May all kings fall down before him, all nations serve him! 12 For he delivers the needy when he calls, the poor and him who has no helper.

45 Immediately he made his disciples get into the boat and go before him to the other side, to Beth-sa’ida, while he dismissed the crowd. 46 And after he had taken leave of them, he went up on the mountain to pray. 47 And when evening came, the boat was out on the sea, and he was alone on the land. 48 And he saw that they were making headway painfully, for the wind was against them. And about the fourth watch of the night he came to them, walking on the sea. He meant to pass by them, 49 but when they saw him walking on the sea they thought it was a ghost, and cried out; 50 for they all saw him, and were terrified. But immediately he spoke to them and said, “Take heart, it is I; have no fear.” 51 And he got into the boat with them and the wind ceased. And they were utterly astounded, 52 for they did not understand about the loaves, but their hearts were hardened.

Reflection for the day: “As pilgrims of faith, the Wise Men themselves became stars shining in the firmament of history and they show us the way. The saints are God’s true constellations, which light up the nights of this world, serving as our guides. Saint Paul, in his Letter to the Philippians, told his faithful that they must shine like stars in the world.” — Pope Emeritus Benedict XVI