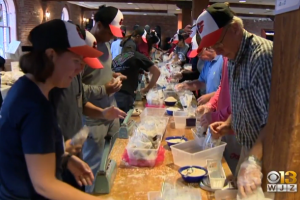 Members of the Baltimore baseball team were among hundreds of volunteers at Catholic Relief Services’ Helping Hands program on Sunday. Participants gathered in a warehouse at Oriole Park and Camden Yards to assemble food packages for drought-stricken Burkina Faso, a West African nation where some 20 percent of the population does not have enough to eat.

“They’ve come out here in the pouring rain to spend their Sunday morning to pack 75,000 meals which will go out to people,” Catholic Relief Services’ president and CEO Sean Callahan told CBS 13.

He added that the initiative “will also provide some monetary assistance so that farmers can plant some onions, can plant a crop that allows their kids to go to school.”CRS Helping Hands is a volunteer opportunity that allows participants to package meals for those affected by droughts and flooding in Africa, as well as to fund longer-term projects that help generate income for people living in vulnerable areas.

The goal of Sunday’s event was to pack 75,000 meals. Organizers said each meal costs 50 cents to provide, according to CBS 13.

75,000 meals were packaged at today’s @CRSHelpingHands event at Oriole Park! Thanks to everyone who volunteered. @CatholicRelief#Birdlandpic.twitter.com/wLLknSzPyF— Baltimore Orioles (@Orioles) September 10, 2018