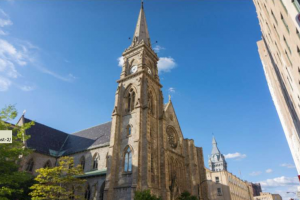 Diocese of Buffalo files for bankruptcy

The Diocese of Buffalo announced on Friday that it is declaring bankruptcy as hundreds of abuse lawsuits have been filed against it in the last several months.

The diocese said it was formally filing for Chapter 11 reorganization under the U.S. bankruptcy code to provide the most compensation for victims of clergy sex abuse while continuing the day-to-day work of its Catholic mission.

“Our decision to pursue Chapter 11 reorganization – arrived at after much prayer, discernment and consultation with the College of Consultors and our Diocesan Finance Council – is based on our belief that this approach will enable the most number of victim-survivors of past sexual abuse in achieving fairness and a sense of restorative justice for the harm they have experienced,” Bishop Edward Scharfenberger, the diocese’s apostolic administrator, said on Friday.

“It will also allow the vital, mission-driven work of faith that is so essential to the residents of Western New York to continue uninterrupted,” Scharfenberger said.

The announcement follows a year in which allegations of a cover-up of clergy sex abuse were made against the diocese. Following the opening of a window in the state statute of limitation last summer, hundreds of abuse lawsuits filed against the diocese in New York courts. Bishop Joseph Malone, who led the diocese from 2012 until last year, resigned in December, following a Vatican-ordered investigation of the diocese by Brooklyn Bishop Nicholas DiMarzio.

Not included in the bankruptcy filing are diocesan parishes and parochial elementary and secondary schools, as well as Catholic Charities of Buffalo, the diocese said, since these are separate legal entities.

One whistleblower in the diocese said the filing is not enough for clergy abuse victims, who want more than just financial compensation.

After the diocese in 2018 released a list of 42 priests accused of “criminal, abusive or inappropriate behavior,” Bishop Malone’s former executive assistant Siobahn O’Connor published documents apparently showing the number of accused priests was actually more than 100.

Speaking to CNA on Friday, O’Conner said “For me, this is a bankruptcy failing.”

“This is yet another way in which the Diocese of Buffalo has failed survivors. For decades, survivors have been silenced while abusive priests were shuffled as statutes of limitation ran out. Survivors were denied the chance for criminal prosecution and the justice that process would have allowed,” O’Conner said.

“Now the Child Victims Act has granted survivors the opportunity for civil prosecution against the Diocese – the institution that protected their abusers, but that institution is still focused on protecting itself. While I can’t say I’m surprised at today’s announcement given all that has occurred up to this point, I am still deeply disappointed in my diocese.”

New York’s 2019 Child Victims Act created a one-year “lookback” window where abuse victims could file lawsuits long after their statute of limitations had ended. The window opened in August, and more than 200 lawsuits have since been filed against the diocese.

Buffalo not the only one

Buffalo is the latest in a series of American dioceses to file for bankruptcy.

Friday’s news is the latest in an ongoing series of stories concerning the Buffalo diocese.

Before his resignation in December, Bishop Malone faced accusations that he kept priests in active ministry who had been credibly accused of abuse, and shielded abuse allegations from the public eye.

In August, Malone’s secretary Fr. Ryszard Biernat leaked audio of a confidential conversation where Malone appeared to believe accusations made against a diocesan priest concerning the grooming of a seminarian. Months later, the accused priest was still in active ministry and Malone was recorded expressing fear that, if allegations of a “love triangle” between the accused priest, the seminarian, and Fr. Biernat were made public, “this could be the end for me as bishop.”

A Vatican investigation into the diocese was conducted in October by Brooklyn Bishop Nicholas DiMarzio. Following Malone’s resignation, Bishop Edward Scharfenberger of Albany was appointed by Pope Francis to oversee the diocese until a replacement was named. Earlier this month, Scharfenberger announced the decision to close Buffalo’s Christ the King Seminary. The seminary was reportedly facing an annual $500 million average deficit over a period of a decade.

In its bankruptcy filing documents, reported by WKBW, the diocese estimated its assets to total between $10 and 50 million, with its liabilities exceeding $50 million.