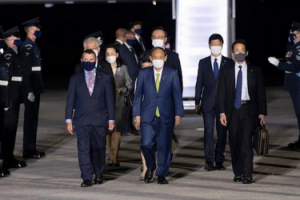 According to reports in mainstream media, Lifesite News and elsewhere, G7 leaders—including ‘Catholic’ president Biden—adopted an agreement promoting the ongoing relentless killing of unborn babies through choosing to support and foster abortion worldwide.

These G7 leaders—including ‘Catholic’ President Biden—agreed to support abortion as part of “sexual and reproductive health and rights,” and to advance “gender equality.”

Would someone please explain how killing unborn humans furthers the cause of “gender equality?”

What astonishing arrogance on the part of these already-born and now powerful “leaders.”

Obviously the millions of voiceless unborn babies in the U.S. and throughout the world—especially the unborn baby girls—would strongly disagree with the statement.

I dare say these innocents would consider such a decision to be the height of hypocrisy, inequality and prejudice against our future generations!

How utterly clueless these powerful “leaders” show themselves to be in making an agreement to foster blindly wipe out millions of future generations by denying them the most basic of human rights: the right to be born.

The audacity of forced slavery—one man selling his brother into servitude for the sake of gaining gold or silver—is bad enough..

Yet those ‘leaders’ who most loudly and publicly claim to abhor slavery nonetheless consistently do everything in their power to institutionalize the ongoing slaughter of unborn human lives—our future generations!

It boggles the mind.

How could a ‘leader’ who fails to protect the most vulnerable human individuals under his or her domain care a wit for frail elderly, or for you or me?  To these ‘leaders’ we are nothing more than faceless, nameless minions.

Beware your habits.  After awhile, the habits you formed and developed over years of repeated action—repeated choices—eventually form YOU.

In the case of these powerful G7 leaders, the pro-abortion media and the public pro-abortion advocates in our towns and cities and, sadly, even in our pews… including ‘Catholic’ Joe Biden and ‘Catholic’ Nancy Pelosi… the habits they (and we) form, eventually form us.

The habit, the repeated choice, to ignore, justify and deny the reality about what abortion is—namely, the taking of an innocent, pre-born human life—hardens our hearts and minds.   We just don’t think about it any more.

The good news is that we know who has the LAST word at the end of our short human lives.

We know who wins in the end.

That said, it seems like an important action to pray for our nation, for our Catholic brothers and sisters, for the unborn, and for the clueless.