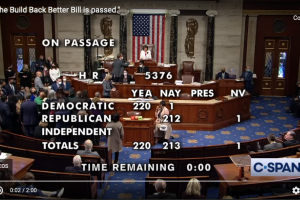 Build Back Better, But Not For Religious Believers

The more than $2 TRILLION, so-dubbed “Build Back Better” Act squeeked through Congress by merely seven votes, now it heads for the Senate.  Amendments are expected, but as inflation is clearly on a major upswing, who in their right mind would approve two-trillion-dollars… TRILLION.. additional government spending that will ultimately come out of the tax-paying pockets of you and me?! -ed., CBJ


Newsweek—The Build Back Better Act won’t just fundamentally alter the scope and size of American government. It will also further the progressive campaign against religion. Buried in the fine print of a bill largely framed as support for families is a discriminatory provision that sidelines religiously affiliated child care providers. President Joe Biden and congressional Democrats are taking aim at care providers that millions of families strongly prefer—all while defying the Supreme Court and undermining religious liberty.

The discrimination can be found in the $390 billion section dealing with expanded child care and universal pre-kindergarten. A big chunk of that money is reserved for states, which can use it to distribute grants that “improve the quality and supply of child care services” through remodeling, repairs and renovations. But child care providers that are religious in nature are explicitly prohibited from spending a cent on facilities that “are used primarily for sectarian instruction or religious worship.”

Faith-based child care is hampered when federal dollars get involved

At first glance, that language may seem unobjectionable. Why should the federal government support churches that also happen to offer child care? Yet that misses the whole point of why parents choose to send their kids to these providers. The promise of faith formation in a strong moral environment isn’t a secondary consideration—it’s the primary motivation for millions of parents. The Supreme Court has long protected religious liberty in situations like this, yet Biden and Congress don’t seem to care.

Polling shows that most parents think faith-based child care is one of the best options for their children, behind only being at home with a parent or relative. And among households with working parents that rely on child care, more than half send their kids to religiously affiliated institutions. The connection to church is a feature, not a flaw.

Churches and religious facilities are often multi-purpose, and singling out child care providers that use them sends a dangerous message. Denying resources to religious facilities says that religious instruction somehow taints or reduces the value of child care—an insult to the overwhelming majority of Americans who have some kind of faith. The bill already requires that providers—faith-based or not—meet rigorous licensing requirements and demonstrate that the facility they seek to renovate prioritizes child care services. So why does another part of the bill seek to discriminate against those same services?

The bill doesn’t completely ban funding for religiously affiliated child care providers. Families can still use its direct subsidies to defray tuition costs. But the Build Back Better Act will still tilt the playing field toward non-religious options. Secular providers will have additional funding to improve their facilities and expand their operations. And as government subsidies allow more families to opt into child care, secular providers will have a significant advantage in building new facilities to meet demand, while houses of worship won’t have help to build at all.

Such discrimination is clearly unconstitutional under Supreme Court precedent. The… Read More>> (we recommend reading the full article. Very Important!)

Josh Holdenried is the vice president and executive director of the Napa Legal Institute.