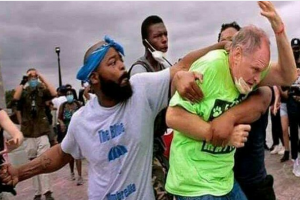 IN CALIFORNIA, a 429-year-old Franciscan missionary edifice — almost five centuries old — is torched in the dark of night. That was Mission San Gabriel Arcángel, founded in 1771 by Franciscan missionary Junipero Serra — the fourth mission in present-day California established by the saint, whose legacy has been unfairly tainted by overzealous (historically naieve —CBJ ed.) Native Americans who feel missionaries subjugated them.

IN FLORIDA, a man citing the Book of Revelation smashes his vehicle through the doors of a Catholic church Saturday and sets it afire. People were inside, praying. That was Queen of Peace Catholic Church in Ocala.

IN NEW YORK, the same week as the California and Florida incidents, someone sprayed-painted the word “idol” on a statue of the Blessed Mother.

IN BOSTON, a statue of Mary was partially burned when plastic flowers she held were ignited, covering her with soot. That was at  St. Peter’s Parish on July 12.

IN ST. LOUIS, one fellow from Black Lives Matter used a canned foghorn to disrupt a group of Catholics praying the Rosary at the statue of the canonized King Louis in the city named after him (also Saturday)

IN FARGO, NORTH DAKOTA, a trumpet-wielding man attacked a monsignor and two parishioners while others waited for an afternoon Sunday Mass to begin July 5 at the downtown St. Mary’s Cathedral.

IN NEW YORK, Twenty-six Catholic schools closed in the Archdiocese of New York.

IN THE PHILLIPPINES, another Franciscan church — Manila’s Sto. Nino de Pandacan Church — was horribly damaged July 10, its 400-year-old statue of the Child Jesus — a miraculous statue — and hundreds of antique religious artifacts reduced to ashes. Firefighters did not find the image, only its melted crown and metal scepter, a priest said. But the fire did not destroy a consecrated Host. (“When the ciborium was opened, the sacred Host was there,” he related to the media. “This is the biggest miracle.

AND YET, THERE IS REASON TO HOPE: Through prayer to Our Lady and Her Son, Our Lord and Saviour.

We discovered the above-mentioned summary in SpiritDailyBlog, and a prophecy at the end which is encouraging no matter how you slice it! READ MORE, WITH PICTURES>>