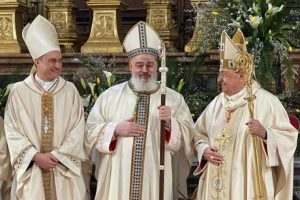 Tehran’s new Catholic archbishop is ordained: ‘Offer the light of the Gospel’

CNA—A Franciscan friar was ordained archbishop of Tehran-Isfahan this week and commissioned to “offer the light of the Gospel” in Iran.

Archbishop Dominique Mathieu, 57, was consecrated in Rome in the Basilica of the Twelve Holy Apostles on Feb. 16, the feast of St. Maruthas, the fourth-century bishop and patron saint of Iran.

Cardinal Leonardo Sandri, prefect of the Congregation for the Oriental Churches, offered the Mass, commissioning the new archbishop to “be a shepherd of His people in Iran.”

“Going to Iran, you will find a Catholic community small in number and diversified in ritual tradition: alongside the Latins of whom you are pastor, you will find Armenians and Chaldeans, as well as brothers of other Christian confessions,” Sandri said.

“Through the triple munus [office], of sanctifying, of governing and of teaching, that is now conferred on you in fullness through episcopal consecration, and together with your fellow ishops, you offer the witness of being salt in that land and offer the light of the Gospel.”

The cardinal said that “no one should be afraid” of this gentle light of the Gospel which shines out “when darkness seems … more impenetrable.”

IRAN IS ONE OF LEAST CATHOLIC COUNTRIES IN THE WORLD

Iran is one of the least Catholic countries in the world. The recently renamed Latin Catholic Archdiocese of Tehran-Isfahan has six parishes and around 2,000 Catholics.

The see of Tehran-Isfahan has been vacant for the past six years after the retirement of Archbishop Ignazio Bedini, a Salesian from Italy.

Belonging to a recognized religious minority within an Islamic republic, Catholic churches in Iran are closely monitored with surveillance cameras by the government and religious schools are limited in what they can teach.

Conversion from Islam to Christianity can be a crime meriting a sentence of more than 10 years of imprisonment.

The newly ordained Archbishop Dominique Mathieu is originally from Belgium. He entered the Franciscan order in 1983 and was ordained a priest in 1989 after studying theology in Rome at the Pontifical Theological Faculty of St. Bonaventure. He speaks five languages, including Arabic.

He served as rector of the St. Anthony national sanctuary in Brussels and later was provincial of the Franciscan order in Belgium. He was sent on mission in 2013 to Lebanon, where he was incardinated in the provincial custody of the East and the Holy Land. Pope Francis appointed him archbishop of Tehran-Isfahan on Jan. 8, 2021.

Following in the footsteps of St. Francis of Assisi

In his homily, Sandri pointed to the example of St. Francis, who traveled to Egypt to meet Sultan al-Malik al-Kamil just over 800 years ago.

“The Holy Father sends you, a son of St. Francis, as the new archbishop of Tehran-Isfahan, with the hope that through your testimony, the style of presence indicated by the Seraphic Father may continue: ‘speak with life before words, and live submissive to every creature,’” he said.

Catholic missionaries have established and reestablished a Latin Catholic presence in Iran throughout the past 700 years.

Dominicans founded the first Latin Catholic diocese in Iran in 1318, which lasted for less than 100 years.

Missionaries returned in 1629 to establish the diocese of Isfahan, which was completely devastated in the 18th century and later entrusted to the bishops of Baghdad.

The cause for beatification of four clerics martyred in Iran was made public earlier this week by the Archdiocese of Paris.

Among the martyrs is Archbishop Jacques-Émile Sontag, a former bishop of Isfahan, who was assassinated in 1918 after assisting Christians to flee Kurdistan during the Ottoman massacre.

Sontag’s cause for beatification was opened along with those of three other martyred Vincentians: Fr. Dinkha (1849-1918), a Vincentian of the Chaldean Rite, born in Iran to a Muslim family and baptized in secret. Fr. François Mirazis (1878-1918), also a native of Iran ordained as a Vincentian priest; and Fr. Mathurin L’Hotellier, a Vincentian who served as superior of the Salmas mission before he was killed at the age of 35.

The see of Isfahan remained vacant in the decades following World War I until an archbishop of Isfahan was appointed five years before the Iranian Revolution. But the archbishop was expelled from Iran in 1980 after Ayatollah Khomeini gained power.

Ten years later, a Latin Catholic archbishop was once again allowed to reside in Tehran and Bedini was consecrated.

Archbishop Emeritus Bedini concelebrated Mathieu’s episcopal ordination along with the Franciscan Cardinal Mauro Gambetti. The ambassador of Iran to the Holy See also attended the ordination.

For his episcopal motto, Mathieu selected “Deus Meus in te confido” (“My God, in you I trust”).

Sandri noted in his homily that the Franciscan also added an eight-pointed “Persian star,” a symbol in traditional Islamic art, in his episcopal coat of arms. The letters IHS, a monogram symbolizing Jesus, are placed inside of this star, which is situated below the symbol of the Franciscan order.

“Set off, filled with divine grace, for the ancient and noble Persian land, making backwards the journey of the Magi who set out from those areas looking at the stars and looking for the Savior,” Sandri said.

“You too are a passionate explorer of the skies, and you wanted to place the ‘Persian star’ in your coat of arms, a reference to the wisdom of that people and at the same time a reference to Christ and Mary Most Holy.”

He continued: “Among the stars that will guide you and intercede for your ministry are certainly that of Mary, Mother of God and our Mother Immaculate Virgin, St. Francis and all the saints of the Franciscan order, the holy Apostles Philip and James, but also St. Maruthas, remembered today in the Roman Martyrology, and the Persian martyrs Abdon and Sennen, whose mortal remains rest a few meters from here in the Basilica of St. Mark.”

“They all watch over your path from heaven and make us feel the Christian heart of Iran which beats in the center of Rome, seat of the Successor of the Apostle Peter.”