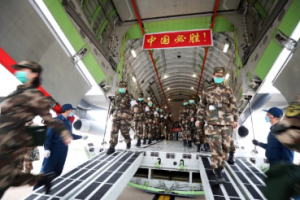 A native of Beijing, Tina Zhang, called the New York offices of The Epoch Times on February 9 of this year to thank the media company for informing her about the severity of the new coronavirus in China. She had viewed the story on a banned Chinese-language You Tube channel a few days after arriving in Beijing  and then traveling to her hometown on January 24 to help a sick friend.

YouTube is banned in China but many bypass the country’s firewall by using VPN software.

Zhang told the news outlet that she had noticed that no matter where she went—in the airport, on the street, in a store—she saw people wearing facemasks. Two days after arriving in China, on a trip to go grocery shopping for her sick friend, she noticed that everyone was wearing a mask, trying to keep distance from one another, grabbing needed items, paying and leaving as soon as possible.

That’s when Zhang became nervous and in searching for news online came across the Chinese-language news channel on YouTube.

The news story reported that Wuhan was experiencing a serious outbreak and the coronavirus was spreading quickly across China and into other countries.  She cross-checked that news with Chinese state media news portals which merely stated that the outbreak was under control.

She had her husband, who remained in the U.S., book her exit flight back to Los Angeles immediately, regardless of price.  Zhang also alerted several friends who were also visiting China at the time. Only one took her advice and asked Zhang to book two more tickets for herself and her child.

As it turned out, Zhang’s friend left China the day before her home city was quarantined and everyone there in lock-down, unable to leave.

Thanks to Zhang’s research outside official party news at least three lives were spared the illness.

To read more details about this story and the reality of news in China, go here>>