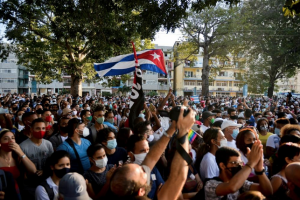 Catholic Priest Beaten and Arrested Amid Protests in Cuba

CNA—Father Castor Álvarez was beaten and arrested in Camagüey while he was defending young protesters amid protests of Cuba’s communist government on Sunday.

According to information confirmed by CNA’s sister agency, ACI Prensa, the priest is being held at the Montecarlo police station in Camagüey, accused of public disorder.

It became known July 12 that the government wants to process the priest for 96 hours for various charges. According to a source related to the Church in Cuba, Archbishop Wilfredo Pino Estevez of Camagüey “tried to see him this morning. He was called later when he was in the Archdiocese so that he went back to the police station”. The source also said that young Catholic people arrested yesterday from Camagüey and Florida, nearly 30 miles northwest of Camagüey, “are still imprisoned”.

Priests, religious sisters and lay people scheduled a peaceful demonstration from 8:00 a.m. July 12 before the police station to demand the freedom of Father Álvarez.
Father Rolando Montes de Oca, a priest of the Archdiocese of Camagüey, told ACI Prensa that “there are, in fact, several elements that help to understand” the origin of the protests.
“The economic situation in this moment is complicated and it has aggravated much more with an economic maneuver that the government made at the beginning of the year, called economic reordering or something like that, that in the end has made life much more difficult,” the priest said.
“Inflation is huge and basic necessities like food have become very difficult to get. There is a very bad situation of material poverty,” he said.
Father Montes de Oca also said that besides the economic crisis, there is great suffering because of the COVID-19 pandemic: “We are in the midst of the COVID-19 crisis. There is a lot of information about people dying, people that do not receive medical attention. Hospitals are collapsed. We see images of sick people in corridors, even on stretchers on the floor”.
The priest also said that “there is a tremendous lack of medicines. Many people do not have a pain reliever. For instance, there are no aspirins. We are not talking about high-end drugs. Nobody has them. They are practically non-existent, sometimes there aren’t even in hospitals.”

Cuban government lies to public and to its people

While the country suffers, “the government has denied that there is a collapse at the medical level (saying) that everything is under control. Meanwhile, reality says something completely different”.
“It is a situation that takes us Cubans back to a period of crisis, which is a kind of national trauma, the special period in the years 1992, 1993 and 1994, in which there were blackouts of many hours”.
Blackouts now occur “almost daily. This and the heat of Cuba and mosquitoes make weather almost unbearable”.
Father Montes de Oca said that all this is “part of the explanation” of the protests that occurred “practically throughout the country”.

The priest said that “there has been a lot of pressure inside the pot and this has exploded”.

“This that is happening in Cuba is unique, at least in the last six decades. I’m 40 years old and I had never seen something like this: all the protests and all the violent repression of the government”.

“The president has spoken on national TV and has said that the order to fight has been given and we are ready for anything”.

“He has obviously blamed the United States for the whole situation Cuba is going through and he has said that we must go against these protesters and has called on all communist forces to go against the protesters with everything”, the priest said.

“And yes, there has been a lot of violence against the protesters, who were peaceful“.

“We are not going to hand over the sovereignty of our country,” the president said, adding that “the order to fight has been given, the revolutionaries should go out to the streets.”

In God’s hands: Hope and Pray

Father Montes de Oca said that “I don’t know what is going to happen or where we are going with all this. I wish something good could happen but I don’t know”.

“I hope that God puts his hand and in the end peace and justice triumph,” he said.

Communist rule in Cuba was established soon after the conclusion of the Cuban Revolution in 1959, which ousted the authoritarian ruler Fulgencio Batista.

Under communism churches and schools were closed, and priests were exiled or assigned to re-education camps. The Church was driven underground until religious tensions in the country began to ease in 1991.