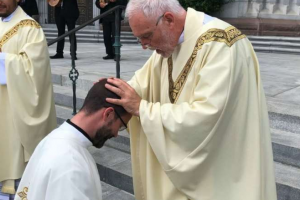 But on June 21, he became a “father” in a whole new sense: Edmond was ordained a priest of the Archdiocese of Newark (New Jersey).

It was Father’s Day. Making the day even more special, it was Edmond’s son — Fr. Philip — who vested his father at ordination.

“To be with Philip is a tremendous gift,” says Edmond about his priest son, “and to have him pray over me and invest me is the greatest gift.” Phillip was ordained in 2016 for the Archdiocese of Washington, D.C., and traveled to Newark for the day.

Fr. Edmond never thought he would become a priest.

He had a wife, a chemical engineering degree and a successful career. But after his wife died of cancer in 2011, he began to consider a new vocation.

At his wife’s wake, a family friend wondered out loud that “maybe Ed will become a priest,” Fr. Edmond recounts. That day, it seemed like a crazy suggestion, but Fr. Edmond now calls the encounter “extremely prophetic,” and says the remark planted an idea in his mind.

Not a Catholic at first

Edmond did not grow up Catholic. He was baptized a Lutheran, and attended religious services “about half a dozen times” until he was 20. He met his wife at a bar, and they began a long-distance relationship.

While they dated, he became a Catholic and attended Mass with his future wife, Constance (“Connie”). They married in 1982.

After Connie’s death, Edmond, who along with his family participates in the Neocatechumenal Way, quit his job and embarked on what is called an “itinerancy;” that is, a period of traveling missionary work organized by the Neocatechumenate.

Edmond says that, at least in the beginning, “priesthood was never anything in my mind.”

The “pull” of the priesthood

During his time as a missionary, Edmond was assigned to help in a New Jersey parish and also worked in prison ministry.

While he lived as a missionary, he began to feel the pull of the priesthood.

After helping lead a trip to the 2013 World Youth Day in Rio de Janeiro, where he prayed for and continued to discern his vocation, Edmond called his catechist, telling him, “I think I have the call [to priesthood].”

Edmond’s son, Fr. Philip, remembers that after his mom died, he had sometimes wondered if his newly-widowed father would become a priest. Father Edmond and to his son, Fr. Philip.

“I don’t know if I ever said this–because I wanted to wait until it actually happened–but the first thought that crossed through my mind in the room there, when Mom died was that ‘my dad would become a priest,’” Philip recalls. “I can’t explain where it came from.”

Philip knew his father “couldn’t kind of just sit around and make money… I knew he had a mission.”

But Philip never told anyone about his thoughts, instead, choosing to place his trust in God.

“I never said a single word about that thought because if it came from the Lord, it would bear fruit,” said Philip.

During his transitional diaconate year, Edmond was assigned to serve at the same parish where he had spent time as a missionary. His first temporary assignment, which begins on July 1, will also be at the parish.

“I arrived [at the parish] with no plans for the priesthood, and the cardinal and the other people had no idea of where they were going to assign me, but that is where they wound up sending me — to the place where my vocation started,” notes Fr. Edmond.

Because of the ongoing COVID-19 pandemic, Fr. Edmond will not find out his permanent assignment until later in the summer. Normally, priestly assignments in the Archdiocese of Newark begin on July 1, but that will be delayed this year until September 1.

Community of Faith impacted every aspect of their lives

The father and son priests told CNA that they are particularly grateful for the community of the Neocatechumenal Way, which Philip described as “the instrument that God used to save my family.”

The Ilgs were introduced to the Catholic program of spiritual renewal during a tumultuous time in their marriage, shortly after the loss of an infant son in childbirth.

The father and son vocations “didn’t just happen sort of in an isolated setting,” Philip explains. “It happened because there was a community which nourished faith and allowed faith to grow.”

“Throughout the years, I really have seen the faithfulness of God through the Neocatechumenal Way,” Philip continues. Without the community’s support, Philip told CNA that he does not think either he nor his father would be priests.

“If it weren’t for a community of faith, which nourished us in faith and formed the body in which it was able to handle us,” Fr. Phillip says—and his father agrees—we would not have had such a remarkable Father’s Day!