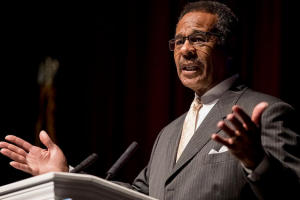 Things you’d never thought you’d EVER hear: “Amen and Awoman” at the end of prayer…

The recently-opened 117th Congress experienced what could be considered the most laughable prayer ever uttered if it was not in the context of such a serious platform. Representative Emanuel Cleaver from Missouri was sworn in on Sunday, and led a prayer in front of Congress to conclude the process. Ordinarily, this would be an appropriate way to give thanks to God, as well as a good example for all public officials. However, the manner in which this Methodist pastor closed out his prayer is going viral because of its ludicrous nature.

“We ask this in the name of the monotheistic God…God known by many names and by many different faiths. Amen, and awoman.” Apart from the glaring and nonsensical “awoman,” there were many aspects of Cleaver’s prayer which were simply contradictory and illogical. He refers to the monotheistic God while also naming the Hindu god Brahma. He implies that God can be known by several names even if those faiths believe in antithetical views of the divine. In an effort not to offend, we end up with a theological mishmash.

But back to the cringe-worthy “awoman.” The term amen has its original roots in the Hebrew equivalent which can be defined as “truth” or “certainty” regarding a stance. The Latin term means “so be it,” expressing an affirmation of a truth previously stated. As one approaches to receive the Body of Christ at the Sacrifice of the Mass, he or she responds with amen, stating that he or she believes that this is truly the Body of Christ. The term has absolutely nothing to do with gender identity or equality; the misuse of the term by Representative Cleaver personifies the irrational arguments made by his allies for years now.