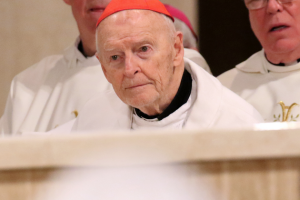 The McCarrick Report: What to know

CNA—On Tuesday, Nov. 10, the Vatican’s Secretariat of State will release a report on its two-year investigation into the career of ex-cardinal Theodore McCarrick, who has been found canonically guilty of serial sexual abuse and misconduct, and was laicized in 2019. (Click here to read The McCarrick Report for yourself)

Who is Theodore McCarrick?

McCarrick entered New York’s St. Joseph’s Seminary in the early 1950s, after a family friend paid for him to study for a year in Switzerland.

What is the McCarrick Report?

In June 2018, the Archdiocese of New York reported that McCarrick, then a cardinal, was credibly accused of sexually abusing a teenager.

The initial allegation said McCarrick had been accused of acts of abuse that happened nearly 50 years ago, when McCarrick was a priest in the Archdiocese of New York. McCarrick was prohibited from public ministry at the time of the announcement.

McCarrick said at the time he had “absolutely no recollection of this reported abuse,” adding “[I] believe in my innocence.”

“I am sorry for the pain the person who brought the charges has gone through, as well as for the scandal such charges cause our people,” McCarrick added.

The Diocese of Metuchen, where McCarrick had also been a bishop, said it had not received allegations of McCarrick sexually abusing minors, but added that the Metuchen diocese and the Newark archdiocese had received three allegations of “sexual misconduct with adults,” and two of those allegations had resulted in settlements.

After the initial report, media reports emerged accusing McCarrick of the serial sexual abuse of minors, and of serial abuse, manipulation, and coercion of seminarians and priests.

It also emerged that Church officials had been informed of some concerns about McCarrick as early as 2000, and several times subsequent to that. There was no public response to the reports made about McCarrick over the years.

After an August 2018 statement from former apostolic nuncio Archbishop Carlo Vigano, reports from CNA and other media outlets indicated that at various times McCarrick had faced informal restrictions in the Church, but had not been formally accused of canonical crimes.

McCarrick was permitted to live on seminary grounds and have seminarian assistants even after legal settlements were paid for claims against him, and reports indicate that some U.S. bishops were aware of some parts of the pattern of claims made against McCarrick, and of settlements for them.

Finally, reporting has shown that McCarrick maintained a large discretionary account while he was archbishop of both Newark and Washington, DC, with which he gave cash gifts to bishops and Vatican officials; financial records of those accounts have not been released.

In October 2018, Pope Francis announced a Vatican review of files and records related to McCarrick’s career, which was expected to focus on who might have enabled his conduct, ignored it, or covered it up. American dioceses sent boxes of material for that review.

The McCarrick Report is expected to detail the findings of that investigation.

Why isn’t McCarrick in jail?

After a canonical process at the Vatican’s Congregation for the Doctrine of the Faith, McCarrick was in 2019 found guilty of serial acts of sexual abuse and misconduct, and laicized.

Once ordained, a priest remains a priest forever and can not be “unordained.” But McCarrick is no longer a cleric, which means he is no longer regarded as an ordained minister of the Church, but as a layperson. He can not perform priestly functions unless someone in danger of death has immediate need of the sacraments.

Some allegations against McCarrick have been referred to law enforcement, but the former cardinal has not been arrested, and no charges pressed against him.

In some cases, the criminal statute of limitations for his crimes may have run out, meaning that he can no longer be charged with those crimes. In other cases, McCarrick’s acts of manipulation or coercion against adults, especially priests and seminarians, while immoral and possible canonical crimes, may not fit the criminal statutes of civil law.

Since the initial allegations against McCarrick began, state attorneys general in New York and New Jersey have opened investigations into diocesan handling of clerical sexual abuse claims, those investigations could find evidence of additional criminal activity on the part of McCarrick or others.

Where is McCarrick now?

After allegations against him emerged in 2018, McCarrick moved to a Capuchin friary in Victoria, Kansas. He left that friary, where he lived as a guest, in January. Senior Church officials told CNA that McCarrick had moved to a community of priests who have been removed from ministry, but the location of that community is not disclosed.

One Church official emphasized that McCarrick is paying for his living expenses, and because he is laicized, lives there by choice, and is free to leave if he wishes.

What has happened in the Church since the McCarrick affair began?

Since June 2018, several U.S. bishops have resigned from their posts under some suspicion or finding of misconduct, and others are being investigated for allegations of sexual misconduct or cover-up.

In 2019, Pope Francis promulgated Vos estis lux mundi, an instruction and new norms for addressing bishops accused of abuse or misconduct. At least two U.S. bishops are being investigated under the auspices of Vos estis.

Dioceses where McCarrick served have not publicly released records, or summaries of their own investigations, in some cases citing ongoing civil investigations.