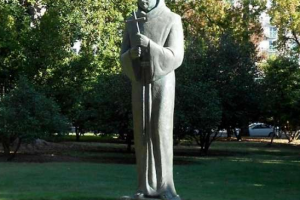 Between 1769 – 1823, the Franciscan friars built a total of 21 missions stretching for 700 miles between San Diego and Sonoma, Calif., most of them thanks to the extraordinary charity and leadership of Saint Junipero Serra.

Father Junipero Serra brought Christ to the Indians of California and also protection. He did not want the Indians he was ministering to to suffer exploitation from Spanish settlers, and he often fought with the Spanish governors and officials who tended to regard him as a fanatic on the subject of the well-being of the Indians.

Father Serra was tireless in his task, traveling from mission to mission to preach to the Indians, baptize them, give them the sacraments, and to aid them in any way he could spiritually and materially.

Over the course of his life, he traveled approximately 24,000 miles, most of it on foot.

In 1778, Saint Junipero Serra was eventually given the power of a bishop to administer the sacrament of Confirmation. He confirmed some 5,039 of his Indian converts.

Father Serra died on August 23, 1784 at Mission San Carlos Borromeo. On his deathbed he said that if God granted him eternal happiness, he would never cease praying for his converts and the many who remained unconverted.

There is so much more richness and inspiration in Saint Junipero Serra’s story, especially for Catholic business professionals, but we’ll save that for a future article!