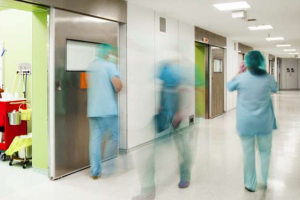 Looks like “essential healthcare workers,” many of whom endured to help patients in need in spite of uncertain disease risk and varying spikes in severe cases of Covid, now may face layoffs and reduced hours.  It turns out that hospitals and healthcare services racked up millions of dollars of debt during the past year, due to many patients canceling surgeries or avoiding addressing other non-Covid health issues citiing a fear of catching Covid.

Nonstop, fear-intensifying half-stories in mainstream news coverage over the past year sure hasn’t helped the situation.

One might consider that the fear-driving mainstream “news,” drone-repeating of stories that consistently failed to include genuine covid cure success stories with doctors prescribing easily available and long-used medications, is a big contributor to creating such a raging fear that certainly helped fuel major declines in hospital revenue over the last year.

In the San Francisco Bay Area alone, Sutter Health said it incurred an operating loss of $321 million last year and $49 million in the first quarter of 2021, as reported by Sacramento-based abc10 news..

In Indiana, Ascension St. Vincent, one of the state’s top hospital systems and the the home of Peyton Manning Children’s Hospital, is part of a major national layoff of technology support workers. The hospital system confirmed about 100 associates will be impacted in Indiana with jobs going to India-based Tech M. The layoffs are scheduled to begin Aug. 8, according to WRTV.

Dallas-based Baylor Scott and White (BSW) —which operates 52 hospitals and has about 49,000 employees—announced in January 2021 it will outsource, lay off or retrain 1,700 employees who work in five departments performing back office duties, and in May BSW

“Hospitals across the country, financially battered as they face the dual challenges of sick COVID-19 patients and a precipitous decline in patient volume, are struggling to balance quickly shifting staffing needs,” reports Healthcare Dive.

Healthcare Dive continues: “Thousands of healthcare workers at hospitals big and small have been asked not to return to work, and it’s still unclear how soon non-essential services will return….during the first half of March, the healthcare industry shed 43,000 jobs — reversing a decade of growth in the sector. According to BLS data, the industry added 49,000 jobs in March 2019.”

“Even our emergency room has seen a significant drop in patients coming in,” notes Sue Philips, an ICU nurse at Palomar Pomerado Health in Northern San Diego.

Due to a 50% decrease in patient volumes, Palomar lost $10 million in revenue in March alone, according to a statement. In April the system said it stands to lose $20 million or more.

In Oregon, Providence (formerly Providence St. Joseph Health)—which operates 51 hospitals across California, Texas, Washington, Montana, New Mexico, Oregon and Alaska and has 119,000 employees— is permanently laying off 183 employees, according to a WARN notice letter the system sent to an Oregon state agency.

This started last year – with few, if any, news reports on mainstream media

Back in December 2020, Becker’s Hospital Review reported that “The financial challenges caused by the COVID-19 pandemic have forced hundreds of hospitals across the nation to furlough, lay off or reduce pay for workers, and others have had to scale back services or close.

Lower patient volumes, canceled elective procedures and higher expenses tied to the pandemic have created a cash crunch for hospitals. U.S. hospitals are estimated to lose more than $323 billion this year [2020], according to a report from the American Hospital Association.

Hospitals are taking a number of steps to offset financial damage. Executives, clinicians and other staff are taking pay cuts, capital projects are being put on hold, and some employees are losing their jobs. More than 260 hospitals and health systems furloughed workers this year and dozens of others have implemented layoffs.

Click here to see a December 2020 list of 15 hospitals and health systems from around the country that announced layoffs since Sept. 1, 2020, many of which were attributed to financial strain caused by the pandemic.

With further layoffs in 2021, what will your local hospital staffing and emergency management look like as we go forward?