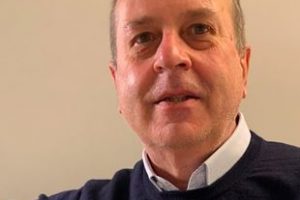 “One last look of tenderness towards those who die alone”

C&L—Luca Salvi (see featured photo) works at the Alzano Lombardo Hospital in Bergamo, Italy, one of the hotbeds of the epidemic, where everything has changed—from the conception of work to relationships amongst colleagues. “What is happening makes us reflect on our consistency,” he says.

For over thirty years, Luca Salvi, an orthopedic doctor, has only dealt with bones. Then, on February 22, 2020, while on holiday in Tuscany, a phone call from one of his colleagues turned his life upside down.

In the hospital of Alzano Lombardo, where Luca is head of Orthopedics, the first cases of Coronavirus had arrived and the situation was getting exponentially worse every hour.

Within a few days, the town at the foot of Val Seriana became one of the hotbeds of the epidemic.

The hospital was re-organized: all the wards were used for Covid19 patients. Luca and the other specialists learnt from their colleagues the standard protocols on how to treat the virus.

“To understand: ten hours in the operating room is the equivalent of one hour of care for these patients. But I want to stress this: we are not heroes,” Dr. Salvi says on the phone. “None of us feel like heroes. We are just doing what we were brought up to do: caring for the sick. Our task is to do it well. We love caring for patients.

“Reality has driven us to put ourselves on the front line by giving everything, and no one has backed down. This painful affair has created a new affection, a friendship, a new sense of responsibility amongst us. Being in this extreme experience has led everyone to reaffirm that life is a gift and must be respected until the very end. Overcoming one’s own limits”.

At the beginning of the emergency, a colleague stops Luca: “I am not prepared to act as an internist, so I need someone to put down in writing that I can deal with these patients without incurring sanctions in the future”. Luca tries to explain to him that this is not possible, sick people are arriving all the time.”

Reality imposes a new perception of our work.

“The doctor does not listen to reason and says: “Then I quit”. The next day, Luca finds him in the ward. At the end of twelve exhausting hours that colleague says to him: “I have been thinking. My task is this: to cure these sick people and to be with …. Read more>>