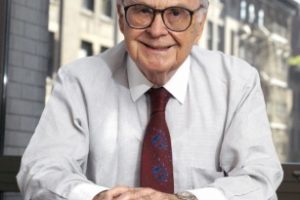 If you missed The Mentors Radio Show live interview with Harold Burson, co-founder of the world’s largest PR firm Burson-Marsteller and a man of exceptional generosity and principles, no problem.  The podcast version is available here, and an extra, private interview is available by signing up for the podcast (free).

To pique your interest, below is a taste from an article by Steve Barrett and published by PRWeek regarding Mr. Burson’s direct, balanced (including an historic perspective only he could present) and truly useful latest book entitled The Business of Persuasion.

Steve Barrett writes:  Harold Burson’s latest book contains some fascinating reflections on his seven-decade career in PR and lots of useful takeaways for those wanting to improve their professional practice.

Regular readers will know I’m a great fan of PR legend Harold Burson, who PRWeek included in the inaugural group of six individuals who were inducted into our Hall of Fame in 2013.

So I was excited to find out that the great man has finished his latest book, The Business of Persuasion, and it is due to hit the streets in early October [2017].

I haven’t read all of it yet, but can already attest to the fact that it’s well worth any PR pro getting hold of a copy.

Mr. Burson bills the book as a personal story, but also the story of Burson-Marsteller, and his “best effort to define public relations and to demonstrate its pervasive role in our daily lives.”

Burson’s definition of PR is contained in the title of the book: persuasion – the discipline of convincing people to do what my employer or client wanted them to do or “Public relations [is] doing good and getting credit for it.”

Building on that, Burson explains that PR includes changing opinions and attitudes, reinforcing them, or creating them where none existed.

Burson’s PR activities always included a call to action: “Merely informing the public was not public relations – that was journalism, a worthy endeavor as well.”

Always a voracious networker, especially with his competitors, which he continues to this day even into his mid-90s, Burson’s mentors included people such as George Hammond, CEO of Carl Byoir Associates; Farley Manning of Manning Selvage & Lee; independent consultant G. Edward Pendray; and John Hill, founder of Hill & Knowlton.

Hill called him after losing a pitch to his agency and said: “Are you Harold Burson? I’m John Hill and if you’re going to take business away from us, I’d like to see what you look like. Come over and have lunch with me.” It was the first of a series of lunches that forged a strong friendship between the two business rivals, whose firms would both eventually end up as part of the WPP empire.

There are many excellent takeaways from this book, but the following are particularly worth highlighting:

In the week [this article was written] particularly, when…. READ MORE>>