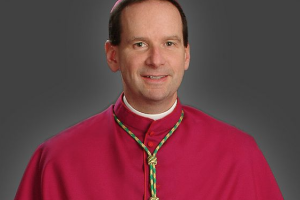 CNA—Nearly 2,800 supporters of the Traditional Latin Mass have signed a petition addressed to Bishop Michael Burbidge (featured image) of Arlington in Virginia. The organizer tells Catholic News Agency (CNA) he delivered that petition to the bishop’s office on Monday.

The document asks Burbidge to lift restrictions he recently imposed on the celebration of the sacraments in the Extraordinary Form.

“In the spirit of the Synodal Path that the church has embarked upon, we humbly ask that you engage in consultations with the faithful of each parish church potentially affected by restrictions on the Traditional Latin Mass,” reads the petition, which was originally published online at Change.org on Jan. 14. “And we pray fervently that you might offer permission to allow the Extraordinary Form and other traditional sacraments to continue across the Diocese of Arlington.”

The petition organizer, 36-year-old Noah Peters of Fairfax, Virginia, told CNA that he handed a printout of the signed petition to the receptionist at the Diocese of Arlington’s main office Jan. 31. At the time of its delivery, the petition listed nearly 2,800 signatures from around the world, with 2,551 signatures from the United States, he said.

“I decided to keep signers from outside the diocese because many indicated in the comments that they had family here or otherwise attend Mass here,” Peters told CNA. “For example, one woman said that she drove two hours each Sunday from Maryland to attend a Traditional Latin Mass (TLM) in our diocese, because our Masses are so beautiful and reverent here!”

The Diocese of Arlington is one of the two Catholic dioceses in Virginia. Twenty-one of the diocese’s 70 parishes offer the Latin Mass, one of the highest percentages among U.S. dioceses.

The petition began earlier this month after Burbidge issued a statement concerning the celebration of the Mass in the Extraordinary Form in the diocese. While the bishop did not restrict any of the existing Traditional Latin Masses in the diocese, he said there is to be no “scheduling of new celebrations of the Sacraments (such as baptisms and weddings) in the Extraordinary Form.”

Peters described how he hoped Burbidge would respond to the petition.

“I am hoping and praying that Bishop Burbidge carefully considers the overwhelming response we received and the many comments, which are quite moving,” he said. Along with the petition itself, Peters delivered the comments that Catholics left on the petition.

Those comments, Peters said, showed the impact of the Traditional Latin Mass on Catholics.

“The comments describe, for example, how the TLM has led converts and fallen-away Catholics alike to full communion with the Church; how it has strengthened families; how it has comforted grieving widows; how it has led to many vocations; and how so many in the diocese pray fervently that they might be able to raise their children in a traditional liturgical life,” he said. “There were also numerous comments from people who primarily attend the Novus Ordo but love the TLM for special occasions and see its beneficial fruits within the Diocese.”

Peters discussed why this mattered to him.

“The Traditional Latin Mass is the bedrock of my wife and I’s spiritual life. It gives an amazing depth of meaning and richness to our lives, and we greatly wish to pass it on to our children,” he said. “It has borne amazing fruit within our diocese, in terms of Mass attendance, conversions, and vocations.”

Peters, a lawyer who attends St. John the Beloved in McLean, Virginia, previously shared his personal connection to the Traditional Latin Mass with CNA. In 2020, he converted to Catholicism from Judaism. He said that his first experience seeing the Traditional Latin Mass in 2019 “blew me away,” and that “any doubt about converting went away immediately.” He was married, in the Extraordinary Form, in October.

Besides his own relationship with the Traditional Latin Mass, Peters said that it holds great significance in the Church.

“The TLM has been the lifeblood of the Church, the source and summit of Catholic life, for thousands of years,” he said. “At a time when there has been an enormous, and catastrophic, decline in Catholic belief and vocations across the globe, the growth of the TLM has been a beacon of light and hope.”

“Suppressing the TLM would be enormously damaging to the Church,” he concluded. “We pray for a wise and careful implementation of Traditionis Custodes.”

He stressed that he and the petitioners support Burbidge with prayer.

When Burbidge issued his directive, it came as a response to the “responsa ad dubia” published by the Congregation for Divine Worship in December. Among the things listed in the responsa, the congregation said that, according to Traditionis custodes, sacraments cannot be celebrated using the Rituale Romanum and the Pontificale Romanum promulgated prior to the reforms following Vatican II.

In a letter to bishops accompanying Traditionis custodes, Pope Francis said that the celebration of the Traditional Latin Mass “is often characterized by a rejection not only of the liturgical reform, but of the Vatican Council II itself, claiming, with unfounded and unsustainable assertions, that it betrayed the Tradition and the ‘true Church.’”

The pope also claimed that communities dedicated to the Traditional Latin Mass had “exploited to widen the gaps, reinforce the divergences, and encourage disagreements that injure the Church, block her path, and expose her to the peril of division.”

The petition says those characterizations do not apply “in any way” in the Arlington diocese.

“Traditional Latin Mass attendees in this diocese are marked by deep reverence and love for the Church and a burning desire to live our Catholic faith as fully as possible, not a sense of disunity and schism,” it reads.

The Diocese of Arlington did not immediately respond to requests for comment.