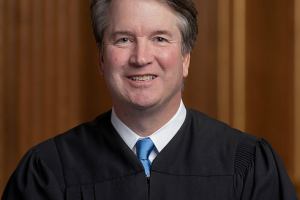 culled from NRLNews and other sources—The attempted Assassination of a Supreme Court justice barely causes a ripple in media coverage, but it’s a huge story!

“The New York Times buried news of a foiled assassination plot against Supreme Court Justice Brett Kavanaugh, placing its only article on the incident on page A20 of Thursday’s edition of the paper.” — National Review Online

“The House will consider a Senate-passed bill to enhance security for Supreme Court justices and their families next week, House Speaker Nancy Pelosi said Thursday, after a man was arrested near Justice Brett Kavanaugh’s home.” — CNN.

Nicholas John Roske, 26, was looking to give his life “purpose.” So he goes all the way across the country to murder Justice Brett Kavanaugh.

The would-be murderer was prepared, that’s for sure. According to CBS News

Roske was taken into custody and seized his backpack and suitcase, which authorities say contained a black tactical chest rig, tactical knife, a Glock 17 pistol with two magazines and ammunition, pepper spray, zip ties, a hammer, screwdriver, nail punch, crowbar, pistol light, duct tape, hiking boots with padding on the outside of the soles, and other items.

So, beyond giving his life “purpose,” why Justice Kavanaugh?

Court documents state that Roske was upset about the leak of a recent Supreme Court draft decision to possibly overturn Roe v. Wade and concerned that Kavanaugh would vote to overturn gun laws.

Roske “was detained around 1:50 a.m. after making threats against Kavanaugh, according to an FBI affidavit filed in federal court in Maryland,” the Washington Post reported. “The suspect was transported to Montgomery County Police 2nd District in Bethesda, Maryland, Supreme Court spokeswoman Patricia McCabe said.” He is charged with attempt to murder a Supreme Court justice. Roske’s preliminary hearing was scheduled for June 22.

How did it happen?

“U.S. Deputy Marshals reported seeing a person dressed in black clothing and carrying a backpack and suitcase get out of a taxi that stopped in front of a current justice’s house at roughly 1:05 a.m., according to the affidavit,” The Post reported. “The person looked at the two marshals and turned to walk down the street, the FBI agent wrote.”

“The Montgomery County Emergency Communications Center then received a call from a person, who identified himself as Roske, saying he was having suicidal thoughts and had a firearm in his suitcase. Roske also said he came from California to kill a “specific United States Supreme Court justice,” according to the filing.” He was arrested without incident.

“Roske indicated that he believed the Justice that he intended to kill would side with Second Amendment decisions that would loosen gun control laws,” according to the affidavit.

“Roske stated that he began thinking about how to give his life a purpose and decided that he would kill the Supreme Court Justice after finding the Justice’s Montgomery County address on the Internet. Roske further indicated that he had purchased the Glock pistol and other items for the purpose of breaking into the Justice’s residence and killing the Justice as well as himself.”

The Kavanaugh headline does not acknowledge Roske’s stated intention to murder the justice, instead stating “Man With Pistol, Crowbar And Zip Ties Is Arrested Near Kavanaugh’s Home.”

The Times is not alone: USA Today did not include a single story on the assassination attempt in its print edition on Thursday and Politico Playbook also failed to mention the narrowly avoided assassination of a Supreme Court justice.

To its credit, the Washington Post did include a story on Kavanaugh on its front page, although its framing “Man arrested near justice’s home” was bereft of context.