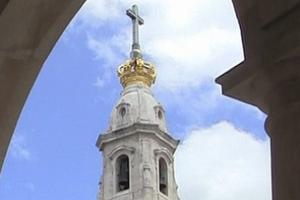 Pro-active Catholic business professionals in California, some of them connected with The Year of Prayer, partnered with seasoned Catholic organizations—Knights of Columbus, Blue Army, Knights of Columbus of California, Catholic Action for Faith and Family, to name a few— to jointly sponsor and coordinate and promote not only a year of prayer but more immediately a focused prayer-and-history immersion.

“Come celebrate the storied history of Catholicism in California,” reads one announcement.  Starting August 28 and running through September 22, 2019, you can participate in the special call to prayer and holiness by tracing the footsteps of Saint Juniper Serra at one, a few, or all of the California Missions.

The Northern California chapter of the Knights of Columbus refers to the prayer tour as “The Portola 250,” giving nod to the Spanish soldier, Gaspar de Portolá, who was in command of the expedition to establish missions in Upper California with Saint Junipero Serra.

Pilgrim Virgin of Fatima statue too!

Even more, the International Pilgrim Virgin Statue of Fatima will be present as well, as part of its Fatima Tour for Peace.  This is a true and special additional blessing for those who participate in the California churches and missions prayer tour.

The way California goes, so goes the nation…eventually. That’s the observation of quite a few pundits, and right now California boasts some of the most aggressive anti-Catholic policies in the country.  We’ve seen those same policies begin to be echoed across the nation, in some other states.

But Our Lady told us not to fear. And, of course, we know who ultimately “wins” in the final end.  That said, it would be nice to help save more souls and avoid severe suffering that anti-human dignity policies and laws create along the way.

Intensifying our prayer life, beginning with those Catholics in California, is a good beginning, especially since the voice and influence of FAITHFUL Catholics has been mostly suppressed or rendered ineffective in deciding California policies.  Organizers of the 21 Mission prayer and Our Lady of Fatima tour hope to change that.

If you live in or near — or want to visit — California, Let’s DO this!!