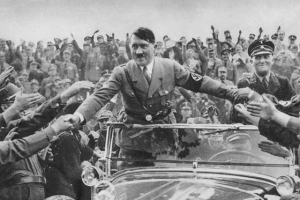 On January 30, 1933, Adolf Hitler was appointed chancellor of the German republic, but how could such a man gain such power?

Hitler’s message of social justice appealed to workers and the lower middle class. Since Hitler knew what it was to struggle to make a living, they thought they had found in him a friend who could understand their troubles and distress.

Despite its name, the National Socialist Party was anything but socialist. Hitler despised socialism, especially Marxist socialism, because it rejected private property and claimed that all working men and races are equal… Read More>>

Music of a Jewish Refugee

Arnold Schoenberg wrote this piece, Drei Lieder (“Three Songs”), Opus 48, in 1933, the year he fled Berlin for Paris to escape Nazi violence. Schoenberg, a Austrian Jew, is known as the father of serialism in music… Listen for yourself>>