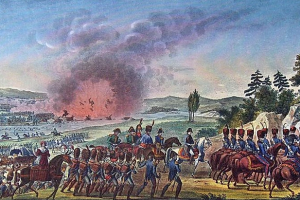 Napoleon’s victories and his defeat at Leipzig came as distant rumors to Pope Pius VII at Fontainebleau. Because the pope was undergoing a bitter struggle of his own, he had cared little for such news.

In January 1813, nine months before the Battle of Leipzig, the pope had received a sudden visit from Napoleon. The emperor had entered unannounced into the pope’s presence; and striding up to the pontiff, Napoleon embraced and kissed him.

Despite the friendly gesture, Napoleon had more in mind than reconciliation. In a series of interviews during which Napoleon at times erupted into anger, he and the pope worked out a new concordat to replace the Concordat of 1801. The new concordat did not force the pope to live at Paris (as Napoleon had wanted) or give secular rulers the right to nominate two-thirds of the cardinals (another of the emperor’s demands); but it did give the emperor more authority over the bishops in his domains. Though he opposed strengthening Napoleon’s control over the Church, Pope Pius, by the advice of his cardinals, signed the concordat.

Napoleon ordered magnificent ceremonies in Paris, including a sung Te Deum, to commemorate the new concordat. Napoleon rejoiced; for, by making peace with the Church, he was able to keep the affections of his people. And the French people, who wanted peace between state and Church, also rejoiced.

But Pius VII did not rejoice. He was deeply troubled in spirit, so much so that he could not eat. Had be betrayed the Church by signing the concordat, he wondered? Though some told him he did what he had to do, the pope thought differently. Finally, with the advice of Cardinal Consalvi, he decided to repudiate the concordat. On March 24, 1813, Napoleon received a message announcing that the pope had… Read more>>

This text comes from a remarkable, highly-praised history textbook written for Catholic schools and currently in use in Catholic schools in more than 100 dioceses nationwide and in English-speaking pockets worldwide, Catholic Textbook Project.com.  The excerpt of this particular historical event is taken from their textbook entitled,  Light to the Nations II: The Making of the Modern World.