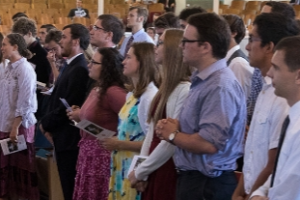 On the morning of August 24, Thomas Aquinas College, New England, held its inaugural Convocation exercises, welcoming 28 freshmen and 30 sophomores from some 20 states and 5 countries — the very first students on the Northfield, Massachusetts, campus.

The morning began with a Mass of the Holy Spirit in the newly renamed Our Mother of Perpetual Help Chapel, with the Most Rev. Mitchell T. Rozanski, Bishop of Springfield, serving as the principal celebrant and homilist. “We gather here in great solemnity, giving thanks to Almighty God for the opening of Thomas Aquinas College on the East Coast of the United States,” His Excellency said in his homily. “The witness of the Thomas Aquinas College community is needed here in Northfield and well beyond. Well versed in our Catholic faith, you will be called to be the prophets of our own age, an age that is currently in despair, seeking the good news that brings true freedom of life in Christ and His church.”

The group of roughly 400 students, faculty, governors, and friends of Thomas Aquinas College then gathered for a flag-raising on the quadrangle, which was followed by the Matriculation Ceremony in the Moody Auditorium. There, as Director of Admissions Jon Daly called each student by name, the freshmen and sophomores came forward, one at a time, to greet President Michael F. McLean and Bishop Rozanski. They then signed their names in the campus registry, thus beginning their tenure as students at Thomas Aquinas College, New England.

In his Matriculation Address, Dr. McLean announced “a new chapter in the history of Thomas Aquinas College” and pledged to work with the College’s friends and neighbors in the region. “We are, in our own way, giving new life to the educational vision that animated this campus in the beginning,” he said,. “In so doing, we hope to continue to forge friendships with the citizens, and with the Catholic communities, of Northfield, the Pioneer Valley, and all of New England.”