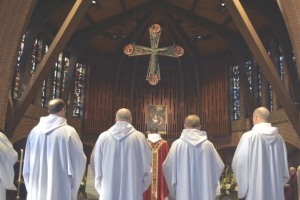 The Battle for St. Anselm College is Real

We thought this was a particularly well-done piece regarding the new, public and highly watched development happening right now in some of the nation’s Benedictine-owned colleges. The issue at stake is very important, very serious, and reflects the much bigger issue of the rebuilding of Catholic culture today, beginning in our Catholic alma maters. —ed., Catholic Business Journal

Crisis magazine—Fearing that New Hampshire’s Saint Anselm College is at risk of losing its Catholic identity, and that their voices will be silenced, members of the order of Benedictine monks of Saint Anselm Abbey—the monastic order that founded the college—have filed a lawsuit against Saint Anselm’s Board of Trustees. The lawsuit, filed on November 27th in Hillsborough County Superior Court in Manchester, asks a judge to prevent the college’s Board of Trustees from changing the bylaws without the consent of the monks. The first hearing took place last week.

Founded on August 1, 1889, when the New Hampshire Legislature incorporated The Order of Saint Benedict of New Hampshire [later re-named Saint Anselm College], the Legislative Charter granted the five founding monk members and their associates and successors the power to “make such bylaws for the government of said corporation, and the admission and expulsion of members and associates thereof, as they shall deem necessary and proper.”

These bylaws have not been changed in more than 130 years, although, in 2009—ostensibly to comply with the regional accreditor’s requirement for independent oversight—the bylaws were changed to increase the number of trustees to 40 and limit the number of monk members to 7 of the 40. Still, the bylaws continued to delegate substantial powers to the monks on the Board of Trustees.

However, in August of 2019, the leadership of the Board of Trustees proposed further changes to the bylaws—severely limiting the monk members’ power to determine what constitutes the College’s Catholic and… Read More>>