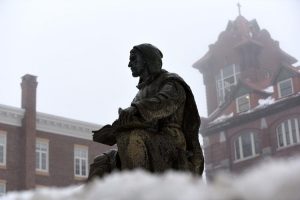 IMPORTANT: Benedictine Monks at St. Anselm sue their own college, worried about its Catholic identity

In a rather unprecedented move, the Benedictine monks of St Anselm Benedictine College in New Hampshire are suing their own college and its leadership for re-directing the college down a path contrary to its core Benedictine mission and purpose.

The fact of a Catholic college turning its back on its founding mission and even on some core tenants of the Faith in the name of “attracting more students” or “becoming more relevant in today’s culture” is not new. Consider the last 40 or so years in the history of University of Notre Dame and Catholic University, of America, the latter of which has made enormous strides to return to its roots in some areas thanks to some recent good presidents and the addition and growth of the Busch School of Business and The Arthur & Carlyse Ciocca Center for Principled Entrepreneurship. Not to mention many formerly formidably Catholic Jesuit universities.

What’s new is that in this latest fight for retaining Catholic identity in a Catholic university the Benedictines, at least those responsible for St. Anselm, are aggressively stepping up to the plate and legally confronting the lay leadership they opted to put in place nearly a decade earlier.  And the monks in at least one Minnesota-based Benedictine college who find themselves in a similarly frustrating and compromised position, are watching carefully.

It is a significant development. A huge, developing story.  After all, the Benedictine monks—founded in 529 A.D—were responsible for educating and civilizing medieval Europe around the 10th -13th centuries.

To set the stage of the current, remarkable and unusual lawsuit, here is how St. Anselm Benedictine College describes it’s “Benedictine Traditions”—that is, the very principles that have set the college apart from every other college since its founding more than a century ago— on the college’s website:

As New England’s Benedictine College, Saint Anselm College is rooted in a Christian and monastic tradition rich with the wisdom culled from 1500 years of communities seeking peace through a well-ordered life envisioned by Saint Benedict of Nursia (c. 480-547).

His ‘little rule for monks’ established a set of principles that has led to human flourishing for members of its communities across ages and civilizations. Whether or not one is a monastic, Catholic, or Christian, the Rule of Benedict and the traditions it has fostered offer a coherent set of values both meaningful and perennial….

After much prayer and discussion, over a long period, the monks now take to the courts in a last ditch effort to return to those founding traditions.

Catholic Business Journal intends to dig further into this topic, but for now, here is a candid recounting of the novel and important-to-watch lawsuit reverberating in the once-hallowed halls of St. Anselm Benedictine College in New Hampshire, as reported by Mark Hayward in the New Hampshire Union Leader on December 9, 2019 —

The lawsuit, filed late last month in Hillsborough County Superior Court in Manchester, asks a judge to prohibit college trustees from changing bylaws without the consent of the monks, whose order founded the university.

The suit exposes rifts that have developed since 2009, when monks handed over many of the responsibilities for the Catholic liberal arts college to a board of trustees.

Ann Catino, chair of the trustees, said the board must strengthen its role to maintain re-accreditation for the college. Federal grants and loans for tuition assistance can only be used at accredited colleges and universities.

In a letter to the college community, Catino called the lawsuit unnecessarily divisive.

“We’re going to vigorously defend it,” she said Monday. “This lawsuit is about the present and future of the institution. We’re at a crossroads.”

The monks said efforts by the trustees to obtain more power — especially over the campus ministry office, the health center, residential life and education — would jeopardize the college’s Catholic tradition. The head monk, Abbot Mark Cooper, said through his attorney that the college currently is not violating any Catholic doctrine.

“These changes put forward by the leadership of the board of trustees carry an unreasonable risk of the secularization of St. Anselm College,” Cooper wrote to trustees in an Aug. 30 letter that was included in … Read full article, including PDF documents, worth the read>>

Please share your feedback on this and other articles in the Comments section below and on Facebook.

RELATED ARTICLES – each of which add depth or shed more light to the excellent link above: