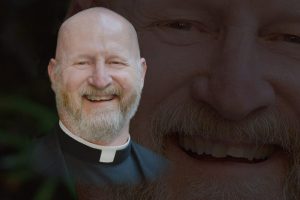 Doug Busch: With God’s grace, he is trucking full speed ahead

He wrestled, played football and threw the javelin at Holy Cross, started at linebacker for the United States Military Academy at West Point, served 24 years in the Army, ran a school for troubled teens in Chicago and spent five years hauling hazardous chemicals 1 million miles throughout all 50 U.S. states and 10 Canadian provinces, sleeping at night behind the steering wheel in a 6-by-8-foot cab he had transformed into a rolling monastic chapel.

So, when Doug Busch, 61, mentions something about his journey to the priesthood being, well, a little bit off the beaten path, he quickly adds that his spiritual GPS has never pointed truer north.

“I’m absolutely heading in the right direction,” said Busch, preparing to be ordained to the transitional diaconate on May 19 at St. Louis Cathedral, the final step before ordination to the priesthood in 2019. “The path that God has me on is definitely the direction I am taking. I am absolutely certain of that.”

Busch admits there were times he could not view life with such objective calculus. After years serving as a cavalryman in the Army’s Armor Branch – “Jeb Stuart rode horses; my job was to go out in front of the major heavy force tanks and find the enemy” – his marriage of 24 years ended in divorce. Busch considers it a real death.

“I generally say I lost my wife,” Busch said. “My world went upside down.”

The end of his marriage, which had produced three sons, prompted Busch to examine his life of strategic advance and marching through life at double time. He began a “reversion” process, filling himself with Catholic reading materials and insights.

“I really began to know God and the Catholic Church,” Busch said. “And then, after a couple of years, I literally heard God call me to be a long-haul truck driver.”

After being passed over for jobs with three trucking companies – “I had never been turned down for a job in my life, and I was more qualified than all get-out” – Busch finally hooked on with Schneider National Bulk Carriers in Reserve, a company that transports hazardous materials throughout North America.

Over the next five years, Busch went through three trucks and drove 1 million miles, covering 600 to 700 miles a day, 28 days out of 30 every month.

“That’s the only way to make money – to be driving,” Busch said.

Instead of spending money on hotels, Busch rested and showered at truck stops along his route and slept in the cab.

“It became my mobile, monastic cell,” Busch said. “I didn’t listen to normal radio. I listened to everything Catholic that I could get my hands on.”

He played audio CDs of Scripture scholar Brant Pitre and listened to podcasts by EWTN’s Jeff Cavins and Scott Hahn.

“It just turned my life around; it just opened me up,” Busch said.

Then, five years later in 2011, he was in Disney World with his two younger sons when his cell phone rang.

“It was right before Christmas, and we were on the last ride of the day,” Busch said. “I got the call, and it was from the coroner in Louisville (Kentucky).”

In the land of make believe, Busch heard the voice on the other end tell him his eldest son Bradley – like his dad a military veteran – had taken his life at the age of 29.

“He had spent a six-year tour in Afghanistan beginning as a young kid, at age 19,” Busch said. “He was with a special forces unit. He just got post-traumatic stress disorder and took his life.”

A few days after Christmas, Busch buried Bradley at the Kentucky Veterans Cemetery Central in Radcliff. He had no inkling of his son’s searing but invisible depression.

“I had spent Thanksgiving with him and he was as happy as could be,” Busch said.

Busch says, simply, the tragedy opened his eyes “some more.”

“No parent wants to bury his child,” Busch said. “When I look back, God was truly, through the worst of times, pouring his grace into my heart. I was literally on my knees crying out to him.”

After completing his annulment process in 2013, Busch was off the road one day when he felt compelled to stop at the archdiocesan chancery office.

“It was just a really strong inspiration,” Busch said. “I looked up the chancery on my GPS and drove there. I was a trucker. I had my long hair in a ponytail. I looked like a trucker, blue jeans and boots. I walked up to the front desk and I asked the lady, ‘Is there somebody I can talk to about being a priest?’ I remember her eyes got really big.”

Since there was no red eject button at the switchboard, the receptionist called Father Steve Bruno, who was then serving as the archdiocesan vocation director. When Father Bruno saw Busch, his eyes popped open as though he had just guzzled a double shot of Red Bull at 3 a.m. on I-95.

“We just walked a dozen and a half times around the chancery,” Busch said. “He told me to come back in the next time I was in town and fill out some application forms.”

Busch was driving his truck filled with hazardous chemicals in Alabama when he got a call in May 2013. It was Archbishop Gregory Aymond on the other end.

“I pulled the truck over to the side of the road,” Bush said.

The archbishop asked if Busch could enter the seminary in August. “I said, ‘Well, yeah, if you’ll have me,’” Busch said.

The last five years of discernment and formation have gone well, and on May 19, Archbishop Aymond will place his hands on Busch’s well-trimmed, gray hair and ordain him as a transitional deacon.

“Before I gave the archbishop the final thumbs up that I was coming, I figured that if this was truly God’s call, then my sons wouldn’t have an issue,” Busch said. “I brought it to them. I asked their permission, basically, and they were enthusiastic about it. They couldn’t see me doing anything else.”

For Busch, the road is clear.

Peter Finney Jr. can be reached at [email protected]. Reprinted with permission.