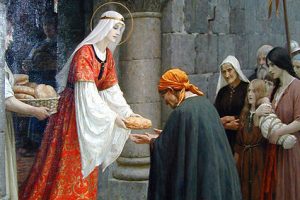 
1 And I saw in the right hand of him who was seated on the throne a scroll written within and on the back, sealed with seven seals; 2 and I saw a strong angel proclaiming with a loud voice, “Who is worthy to open the scroll and break its seals?” 3 And no one in heaven or on earth or under the earth was able to open the scroll or to look into it, 4 and I wept much that no one was found worthy to open the scroll or to look into it. 5 Then one of the elders said to me, “Weep not; lo, the Lion of the tribe of Judah, the Root of David, has conquered, so that he can open the scroll and its seven seals.” 6 And between the throne and the four living creatures and among the elders, I saw a Lamb standing, as though it had been slain, with seven horns and with seven eyes, which are the seven spirits of God sent out into all the earth; 7 and he went and took the scroll from the right hand of him who was seated on the throne. 8 And when he had taken the scroll, the four living creatures and the twenty-four elders fell down before the Lamb, each holding a harp, and with golden bowls full of incense, which are the prayers of the saints; 9 and they sang a new song, saying, “Worthy art thou to take the scroll and to open its seals, for thou wast slain and by thy blood didst ransom men for God from every tribe and tongue and people and nation, 10 and hast made them a kingdom and priests to our God, and they shall reign on earth.”


1 Praise the Lord! Sing to the Lord a new song, his praise in the assembly of the faithful! 2 Let Israel be glad in his Maker, let the sons of Zion rejoice in their King! 3 Let them praise his name with dancing, making melody to him with timbrel and lyre! 4 For the Lord takes pleasure in his people; he adorns the humble with victory. 5 Let the faithful exult in glory; let them sing for joy on their couches. 6 Let the high praises of God be in their throats and two-edged swords in their hands. 9 To execute on them the judgment written! This is glory for all his faithful ones. Praise the Lord!

Reflection for the day: “How could I bear a crown of gold when the Lord bears a crown of thorns?…and bears it for me!” — St. Elizabeth of Hungary 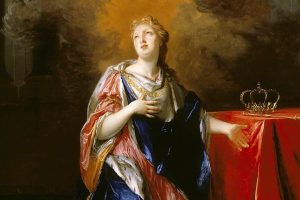