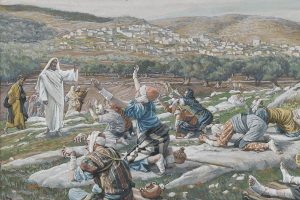 
14 So he went down and dipped himself seven times in the Jordan, according to the word of the man of God; and his flesh was restored like the flesh of a little child, and he was clean. 15 Then he returned to the man of God, he and all his company, and he came and stood before him; and he said, “Behold, I know that there is no God in all the earth but in Israel; so accept now a present from your servant.” 16 But he said, “As the LORD lives, whom I serve, I will receive none.” And he urged him to take it, but he refused. 17 Then Na’aman said, “If not, I pray you, let there be given to your servant two mules’ burden of earth; for henceforth your servant will not offer burnt offering or sacrifice to any god but the LORD.”


8 Remember Jesus Christ, risen from the dead, descended from David, as preached in my gospel, 9the gospel for which I am suffering and wearing fetters like a criminal. But the word of God is not fettered. 10 Therefore I endure everything for the sake of the elect, that they also may obtain salvation in Christ Jesus with its eternal glory. 11 The saying is sure: If we have died with him, we shall also live with him; 12 if we endure, we shall also reign with him; if we deny him, he also will deny us; 13 if we are faithless, he remains faithful — for he cannot deny himself.


11 On the way to Jerusalem he was passing along between Sama’ria and Galilee. 12 And as he entered a village, he was met by ten lepers, who stood at a distance 13 and lifted up their voices and said, “Jesus, Master, have mercy on us.” 14 When he saw them he said to them, “Go and show yourselves to the priests.” And as they went they were cleansed. 15 Then one of them, when he saw that he was healed, turned back, praising God with a loud voice; 16 and he fell on his face at Jesus’ feet, giving him thanks. Now he was a Samaritan. 17 Then said Jesus, “Were not ten cleansed? Where are the nine? 18 Was no one found to return and give praise to God except this foreigner?” 19 And he said to him, “Rise and go your way; your faith has made you well.”

Reflection for the day: “Those who refuse to be humble cannot be saved. They cannot say with the prophet: See, God comes to my aid; the Lord is the helper of my soul. But anyone who makes himself humble, like a little child, is greater in the kingdom of heaven.” — St. Bede the Venerable