Feast of the Nativity of the Blessed Virgin Mary 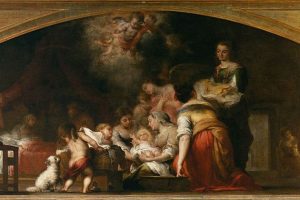 
1 Now you are walled about with a wall; siege is laid against us; with a rod they strike upon the cheek the ruler of Israel. 2 But you, O Bethlehem Eph’rathah, who are little to be among the clans of Judah, from you shall come forth for me one who is to be ruler in Israel, whose origin is from of old, from ancient days. 3 Therefore he shall give them up until the time when she who is in travail has brought forth; then the rest of his brethren shall return to the people of Israel. 4 And he shall stand and feed his flock in the strength of the LORD, in the majesty of the name of the LORD his God. And they shall dwell secure, for now he shall be great to the ends of the earth.


5 But I have trusted in thy steadfast love; my heart shall rejoice in thy salvation.

Reflection for the day: “The day of the Nativity of the Mother of God is a day of universal joy because through the Mother of God, the entire human race was renewed, and the sorrow of the first mother, Eve, was transformed into joy.” — St. John Damascene