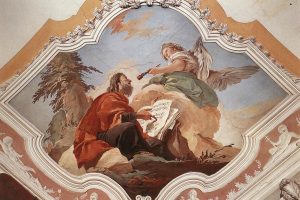 
24 “A disciple is not above his teacher, nor a servant above his master; 25 it is enough for the disciple to be like his teacher, and the servant like his master. If they have called the master of the house Be-el’zebul, how much more will they malign those of his household. 26 So have no fear of them; for nothing is covered that will not be revealed, or hidden that will not be known. 27 What I tell you in the dark, utter in the light; and what you hear whispered, proclaim upon the housetops. 28 And do not fear those who kill the body but cannot kill the soul; rather fear him who can destroy both soul and body in hell. 29 Are not two sparrows sold for a penny? And not one of them will fall to the ground without your Father’s will. 30 But even the hairs of your head are all numbered. 31 Fear not, therefore; you are of more value than many sparrows. 32 So every one who acknowledges me before men, I also will acknowledge before my Father who is in heaven; 33 but whoever denies me before men, I also will deny before my Father who is in heaven.”

Reflection for the day: “One’s love for God should be limitless. Honouring God with conditions, is dishonouring Him!” — St. Anthony Mary Zaccaria