Memorial of St. Catherine of Siena, Virgin and Doctor of the Church 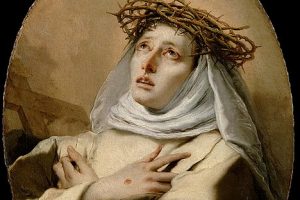 
34 But a Pharisee in the council named Gama’li-el, a teacher of the law, held in honor by all the people, stood up and ordered the men to be put outside for a while. 35 And he said to them, “Men of Israel, take care what you do with these men. 36 For before these days Theu’das arose, giving himself out to be somebody, and a number of men, about four hundred, joined him; but he was slain and all who followed him were dispersed and came to nothing. 37 After him Judas the Galilean arose in the days of the census and drew away some of the people after him; he also perished, and all who followed him were scattered. 38 So in the present case I tell you, keep away from these men and let them alone; for if this plan or this undertaking is of men, it will fail; 39 but if it is of God, you will not be able to overthrow them. You might even be found opposing God!” 40 So they took his advice, and when they had called in the apostles, they beat them and charged them not to speak in the name of Jesus, and let them go. 41 Then they left the presence of the council, rejoicing that they were counted worthy to suffer dishonor for the name. 42 And every day in the temple and at home they did not cease teaching and preaching Jesus as the Christ.


1 The LORD is my light and my salvation; whom shall I fear? The LORD is the stronghold of my life; of whom shall I be afraid? 4 One thing have I asked of the LORD, that will I seek after; that I may dwell in the house of the LORD all the days of my life, to behold the beauty of the LORD, and to inquire in his temple. 13 I believe that I shall see the goodness of the LORD in the land of the living! 14 Wait for the LORD; be strong, and let your heart take courage; yea, wait for the LORD!


1 After this Jesus went to the other side of the Sea of Galilee, which is the Sea of Tiber’i-as. 2 And a multitude followed him, because they saw the signs which he did on those who were diseased. 3 Jesus went up on the mountain, and there sat down with his disciples. 4 Now the Passover, the feast of the Jews, was at hand. 5 Lifting up his eyes, then, and seeing that a multitude was coming to him, Jesus said to Philip, “How are we to buy bread, so that these people may eat?” 6 This he said to test him, for he himself knew what he would do. 7 Philip answered him, “Two hundred denarii would not buy enough bread for each of them to get a little.” 8 One of his disciples, Andrew, Simon Peter’s brother, said to him, 9 “There is a lad here who has five barley loaves and two fish; but what are they among so many?” 10 Jesus said, “Make the people sit down.” Now there was much grass in the place; so the men sat down, in number about five thousand. 11 Jesus then took the loaves, and when he had given thanks, he distributed them to those who were seated; so also the fish, as much as they wanted. 12 And when they had eaten their fill, he told his disciples, “Gather up the fragments left over, that nothing may be lost.” 13 So they gathered them up and filled twelve baskets with fragments from the five barley loaves, left by those who had eaten. 14 When the people saw the sign which he had done, they said, “This is indeed the prophet who is to come into the world!” 15 Perceiving then that they were about to come and take him by force to make him king, Jesus withdrew again to the mountain by himself.

Reflection for the day: “O unfathomable depth! O Deity eternal! O deep ocean! What more could You give me than to give me Yourself? You are an ever-burning Fire; You consume and are not consumed. By Your fire, You consume every trace of self-love in the soul. You are a Fire which drives away all coldness and illumines minds with its light, and with this light You have made known Your truth. Truly this light is a sea which feeds the soul until it is all immersed in You, O peaceful Sea, eternal Trinity! The water of this sea is never turbid; it never causes fear, but gives knowledge of the truth. This water is transparent and discloses hidden things; and a living faith gives such abundance of light that the soul almost attains to certitude in what it believes.” — St. Catherine of Siena