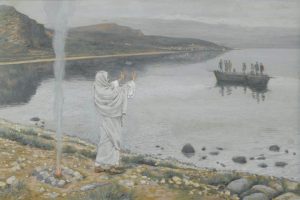 Reflection for the day: “But He who descended into the regions beneath the earth came up again; and Jesus, who was buried, truly rose again the third day. And if the Jews ever worry thee, meet them at once by asking thus: Did Jonah come forth from the whale on the third day, and hath not Christ then risen from the earth on the third day? Is a dead man raised to life on touching the bones of Elisha, and is it not much easier for the Maker of mankind to be raised by the power of the Father? Well then, He truly rose, and after He had risen was seen again of the disciples; and twelve disciples were witnesses of His Resurrection, who bare witness not in pleasing words, but contended even unto torture and death for the truth of the Resurrection. What then, shall every word be established at the mouth of two of three witnesses, according to the Scripture, and, though twelve bear witness to the Resurrection of Christ, art thou still incredulous in regard to His Resurrection?” — St. Cyril of Jerusalem