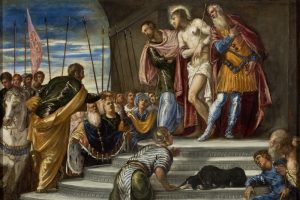 
3 Now Israel loved Joseph more than any other of his children, because he was the son of his old age; and he made him a long robe with sleeves. 4 But when his brothers saw that their father loved him more than all his brothers, they hated him, and could not speak peaceably to him. 12 Now his brothers went to pasture their father’s flock near Shechem. 13 And Israel said to Joseph, “Are not your brothers pasturing the flock at Shechem? Come, I will send you to them.” And he said to him, “Here I am.” 17 And the man said, “They have gone away, for I heard them say, `Let us go to Dothan.'” So Joseph went after his brothers, and found them at Dothan. 18 They saw him afar off, and before he came near to them they conspired against him to kill him. 19 They said to one another, “Here comes this dreamer. 20 Come now, let us kill him and throw him into one of the pits; then we shall say that a wild beast has devoured him, and we shall see what will become of his dreams.” 21 But when Reuben heard it, he delivered him out of their hands, saying, “Let us not take his life.” 22 And Reuben said to them, “Shed no blood; cast him into this pit here in the wilderness, but lay no hand upon him” — that he might rescue him out of their hand, to restore him to his father. 23 So when Joseph came to his brothers, they stripped him of his robe, the long robe with sleeves that he wore; 24 and they took him and cast him into a pit. The pit was empty, there was no water in it. 25 Then they sat down to eat; and looking up they saw a caravan of Ish’maelites coming from Gilead, with their camels bearing gum, balm, and myrrh, on their way to carry it down to Egypt. 26 Then Judah said to his brothers, “What profit is it if we slay our brother and conceal his blood? 27 Come, let us sell him to the Ish’maelites, and let not our hand be upon him, for he is our brother, our own flesh.” And his brothers heeded him. 28 Then Mid’ianite traders passed by; and they drew Joseph up and lifted him out of the pit, and sold him to the Ish’maelites for twenty shekels of silver; and they took Joseph to Egypt.


33 “Hear another parable. There was a householder who planted a vineyard, and set a hedge around it, and dug a wine press in it, and built a tower, and let it out to tenants, and went into another country. 34 When the season of fruit drew near, he sent his servants to the tenants, to get his fruit; 35 and the tenants took his servants and beat one, killed another, and stoned another. 36 Again he sent other servants, more than the first; and they did the same to them. 37 Afterward he sent his son to them, saying, `They will respect my son.’ 38 But when the tenants saw the son, they said to themselves, `This is the heir; come, let us kill him and have his inheritance.’ 39 And they took him and cast him out of the vineyard, and killed him. 40 When therefore the owner of the vineyard comes, what will he do to those tenants?” 41 They said to him, “He will put those wretches to a miserable death, and let out the vineyard to other tenants who will give him the fruits in their seasons.” 42 Jesus said to them, “Have you never read in the scriptures: `The very stone which the builders rejected has become the head of the corner; this was the Lord’s doing, and it is marvelous in our eyes’? 43 Therefore I tell you, the kingdom of God will be taken away from you and given to a nation producing the fruits of it.” 45 When the chief priests and the Pharisees heard his parables, they perceived that he was speaking about them. 46 But when they tried to arrest him, they feared the multitudes, because they held him to be a prophet.

Reflection for the day:  “My adorable Jesus, it was not Pilate; no, it was my sins that condemned You to die. I beseech You, by the merits of this sorrowful journey, to assist my soul on its journey to eternity.” — St. Alphonsus Liguori, Stations of the Cross: 1st Station