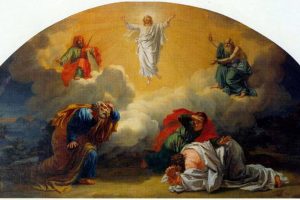 
5 And he brought him outside and said, “Look toward heaven, and number the stars, if you are able to number them.” Then he said to him, “So shall your descendants be.” 6 And he believed the LORD; and he reckoned it to him as righteousness. 7 And he said to him, “I am the LORD who brought you from Ur of the Chalde’ans, to give you this land to possess.” 8 But he said, “O Lord GOD, how am I to know that I shall possess it?” 9 He said to him, “Bring me a heifer three years old, a she-goat three years old, a ram three years old, a turtledove, and a young pigeon.” 10 And he brought him all these, cut them in two, and laid each half over against the other; but he did not cut the birds in two. 11 And when birds of prey came down upon the carcasses, Abram drove them away. 12 As the sun was going down, a deep sleep fell on Abram; and lo, a dread and great darkness fell upon him. 17 When the sun had gone down and it was dark, behold, a smoking fire pot and a flaming torch passed between these pieces. 18 On that day the LORD made a covenant with Abram, saying, “To your descendants I give this land, from the river of Egypt to the great river, the river Euphra’tes.”


1 The LORD is my light and my salvation; whom shall I fear? The LORD is the stronghold of my life; of whom shall I be afraid? 7 Hear, O LORD, when I cry aloud, be gracious to me and answer me! 8 Thou hast said, “Seek ye my face.” My heart says to thee, “Thy face, LORD, do I seek.” 9 Hide not thy face from me. Turn not thy servant away in anger, thou who hast been my help. Cast me not off, forsake me not, O God of my salvation! 13 I believe that I shall see the goodness of the LORD in the land of the living! 14 Wait for the LORD; be strong, and let your heart take courage; yea, wait for the LORD!


3:17 Brethren, join in imitating me, and mark those who so live as you have an example in us. 18 For many, of whom I have often told you and now tell you even with tears, live as enemies of the cross of Christ. 19 Their end is destruction, their god is the belly, and they glory in their shame, with minds set on earthly things. 20 But our commonwealth is in heaven, and from it we await a Savior, the Lord Jesus Christ, 21 who will change our lowly body to be like his glorious body, by the power which enables him even to subject all things to himself. 4:1 Therefore, my brethren, whom I love and long for, my joy and crown, stand firm thus in the Lord, my beloved.

Reflection for the day: “Look upon the hour of Eucharistic adoration assigned to you as an hour in paradise.” — St. Peter Julian Eymard 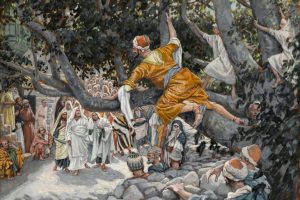