Wednesday of the 5th Week in Ordinary Time 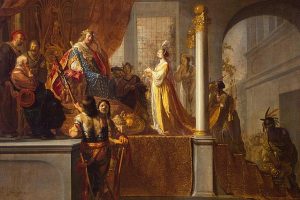 1 Now when the queen of Sheba heard of the fame of Solomon concerning the name of the LORD, she came to test him with hard questions. 2 She came to Jerusalem with a very great retinue, with camels bearing spices, and very much gold, and precious stones; and when she came to Solomon, she told him all that was on her mind. 3 And Solomon answered all her questions; there was nothing hidden from the king which he could not explain to her. 4 And when the queen of Sheba had seen all the wisdom of Solomon, the house that he had built, 5 the food of his table, the seating of his officials, and the attendance of his servants, their clothing, his cupbearers, and his burnt offerings which he offered at the house of the LORD, there was no more spirit in her. 6 And she said to the king, “The report was true which I heard in my own land of your affairs and of your wisdom, 7 but I did not believe the reports until I came and my own eyes had seen it; and, behold, the half was not told me; your wisdom and prosperity surpass the report which I heard. 8 Happy are your wives! Happy are these your servants, who continually stand before you and hear your wisdom! 9 Blessed be the LORD your God, who has delighted in you and set you on the throne of Israel! Because the LORD loved Israel for ever, he has made you king, that you may execute justice and righteousness.” 10 Then she gave the king a hundred and twenty talents of gold, and a very great quantity of spices, and precious stones; never again came such an abundance of spices as these which the queen of Sheba gave to King Solomon.

5 Commit your way to the LORD; trust in him, and he will act. 6 He will bring forth your vindication as the light, and your right as the noonday. 30 The mouth of the righteous utters wisdom, and his tongue speaks justice. 31 The law of his God is in his heart; his steps do not slip. 39 The salvation of the righteous is from the LORD; he is their refuge in the time of trouble. 40 The LORD helps them and delivers them; he delivers them from the wicked, and saves them, because they take refuge in him.

14 And he called the people to him again, and said to them, “Hear me, all of you, and understand: 15 there is nothing outside a man which by going into him can defile him; but the things which come out of a man are what defile him.” 17 And when he had entered the house, and left the people, his disciples asked him about the parable. 18 And he said to them, “Then are you also without understanding? Do you not see that whatever goes into a man from outside cannot defile him, 19 since it enters, not his heart but his stomach, and so passes on?” (Thus he declared all foods clean.) 20 And he said, “What comes out of a man is what defiles a man. 21 For from within, out of the heart of man, come evil thoughts, fornication, theft, murder, adultery, 22 coveting, wickedness, deceit, licentiousness, envy, slander, pride, foolishness. 23 All these evil things come from within, and they defile a man.”

Reflection for the day: “Who could count all those who have had wealth, power, honor? But their glory, their riches were only lent to them, and they wore themselves out in preserving and increasing that which they were forced to abandon one day.” — St. Ignatius of Loyola