Memorial of St. Thomas Aquinas, Priest and Doctor of the Church 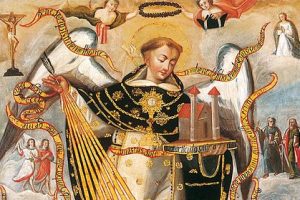 
1 In the spring of the year, the time when kings go forth to battle, David sent Jo’ab, and his servants with him, and all Israel; and they ravaged the Ammonites, and besieged Rabbah. But David remained at Jerusalem. 2 It happened, late one afternoon, when David arose from his couch and was walking upon the roof of the king’s house, that he saw from the roof a woman bathing; and the woman was very beautiful. 3 And David sent and inquired about the woman. And one said, “Is not this Bathshe’ba, the daughter of Eli’am, the wife of Uri’ah the Hittite?” 4 So David sent messengers, and took her; and she came to him, and he lay with her. (Now she was purifying herself from her uncleanness.) Then she returned to her house. 5 And the woman conceived; and she sent and told David, “I am with child.” 6 So David sent word to Jo’ab, “Send me Uri’ah the Hittite.” And Jo’ab sent Uri’ah to David. 7 When Uri’ah came to him, David asked how Jo’ab was doing, and how the people fared, and how the war prospered. 8 Then David said to Uri’ah, “Go down to your house, and wash your feet.” And Uri’ah went out of the king’s house, and there followed him a present from the king. 9 But Uri’ah slept at the door of the king’s house with all the servants of his lord, and did not go down to his house. 10 When they told David, “Uri’ah did not go down to his house,” David said to Uri’ah, “Have you not come from a journey? Why did you not go down to your house?” 13 And David invited him, and he ate in his presence and drank, so that he made him drunk; and in the evening he went out to lie on his couch with the servants of his lord, but he did not go down to his house. 14 In the morning David wrote a letter to Jo’ab, and sent it by the hand of Uri’ah. 15 In the letter he wrote, “Set Uri’ah in the forefront of the hardest fighting, and then draw back from him, that he may be struck down, and die.” 16 And as Jo’ab was besieging the city, he assigned Uri’ah to the place where he knew there were valiant men. 17 And the men of the city came out and fought with Jo’ab; and some of the servants of David among the people fell. Uri’ah the Hittite was slain also.


1 Have mercy on me, O God, according to thy steadfast love; according to thy abundant mercy blot out my transgressions. 2 Wash me thoroughly from my iniquity, and cleanse me from my sin! 3 For I know my transgressions, and my sin is ever before me. 4 Against thee, thee only, have I sinned, and done that which is evil in thy sight, so that thou art justified in thy sentence and blameless in thy judgment. 5 Behold, I was brought forth in iniquity, and in sin did my mother conceive me. 8 Fill me with joy and gladness; let the bones which thou hast broken rejoice. 9 Hide thy face from my sins, and blot out all my iniquities.


26 And he said, “The kingdom of God is as if a man should scatter seed upon the ground, 27 and should sleep and rise night and day, and the seed should sprout and grow, he knows not how. 28 The earth produces of itself, first the blade, then the ear, then the full grain in the ear. 29 But when the grain is ripe, at once he puts in the sickle, because the harvest has come.” 30 And he said, “With what can we compare the kingdom of God, or what parable shall we use for it? 31 It is like a grain of mustard seed, which, when sown upon the ground, is the smallest of all the seeds on earth; 32 yet when it is sown it grows up and becomes the greatest of all shrubs, and puts forth large branches, so that the birds of the air can make nests in its shade.” 33 With many such parables he spoke the word to them, as they were able to hear it; 34 he did not speak to them without a parable, but privately to his own disciples he explained everything.

Reflection for the day: “I receive Thee, price of my redemption, viaticum of my pilgrimage, for whom I have fasted, prayed, taught, and labored. Never have I said a word against Thee. If I have, it was in ignorance, and I do not persist in my ignorance. I leave the correction of my work to the Holy Catholic Church, and in that obedience I pass from this life.” — St. Thomas Aquinas